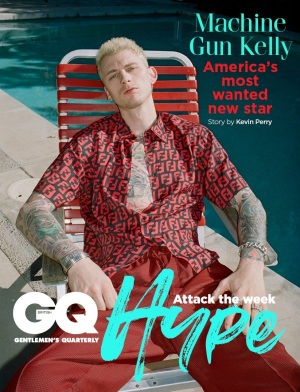 Machine Gun Kelly’s house in LA is the sort of place that makes it a shame they don’t do MTV Cribs any more. A gothic-style mansion arranged around a huge central staircase, the place is decorated with ornate chandeliers and elaborate tapestries, but there are plenty of clues that this is a young man’s bachelor pad. One room, which looks out onto the swimming pool, is given over to a hoop-shooting basketball arcade game, a pool table and a Monster Energy-branded drinks fridge.

Yet for all his hard-partying ways, Machine Gun Kelly is difficult to pigeonhole. Sure, on the one hand he’s a 6ft 4in bleach-haired rapper from Cleveland, Ohio, who has beefed with Eminem, but he has also enjoyed pop success, collaborating with Camila Cabello on “Bad Things” (409m Spotify plays). As an actor (he performs under his real name, Colson Baker), he had a break-out role this year playing to type as fellow wild boy – and new friend – Tommy Lee in Netflix’s Mötley Crüe biopic The Dirt, yet he’s also a doting father to his ten-year-old daughter, Casie, and concerned enough about his own health that shortly after we meet he syringes a shot of oregano oil into his mouth. “For every foul thing I put in my body I try to pump something good in there,” he explains. “Especially after the weekend I’ve just had.”

With a fourth album, Hotel Diablo, out now and more acting jobs on the way, including a role alongside Davidson in the comedy Big Time Adolescence, Machine Gun Kelly sits down, sparks up a joint and takes the GQ&A…

Those of you who’ve heard me sing “Margaritaville” with a margarita in hand will know exactly how much I love @JimmyBuffett. This week I talked to him about recording his great album 'Volcano' on Montserrat for @the.independent. Of course I couldn’t resist getting him to tell me his favourite Hunter Thompson story. Here it is in full: “Hunter always told me he had a great friendship with Muhammad Ali, because they were both from Kentucky. We went down to New Orleans to the see the fight where he fought Leon Spinks, and of course, Ali won and won his title back. That night, I mean, we all went out on the town in New Orleans and had a big time, but Hunter just went completely wild. Unfortunately I’d gotten him a room in my hotel and he was raising hell. Eventually I went to bed and said: ‘I'm done with this stuff’. Then at 6:30 in the morning the phone rings and it's Hunter: 'Get up, we've got to go.' I said: 'No, I'm not going anywhere with you!' He said: 'Yes you are, because we're going over to watch the fight with Ali.’ So I got out of bed and we went over to their hotel, and we went up to the suite, and there was Ali surrounded by all these Muslim bodyguards. Then Ali, Hunter and I sat down and watched the fight together. Ali was doing play-by-play commentary of himself: ‘You got him there, champ!’ So Hunter made good on his promise! Not only did we go to the fight, we watched it with Muhammad Ali. It doesn’t get much better than that!”
Getting my caffeine fix with the great @michael.pollan. Ever since I read his new book This Is Your Mind On Plants I haven't been able to stop thinking about the fascinating history of the world's most popular psychoactive drug (which was basically responsible for the Enlightenment). We talked about the power of coffee, growing opium in his back garden and - my favourite topic - taking so much acid you experience ego death for today's @the.independent.
Sheryl Crow's 'The Globe Sessions' is one of the first albums I remember stealing from my parent's collection to play on repeat in my room. Her songs remind me of my best friends, my family and my probably ill-advised attempts to perform them at karaoke. Was a total joy to talk to her about her remarkable life and music for this weekend's @the.independent
When I wrote about @corvaincooper last year he was still in prison facing life without the possibility of parole. His friend Anthony put us in touch. So great to finally meet them both and see Corvain enjoying his freedom - a massive tribute to the amazing advocacy work for cannabis prisoners done by @lastprisonerproject.