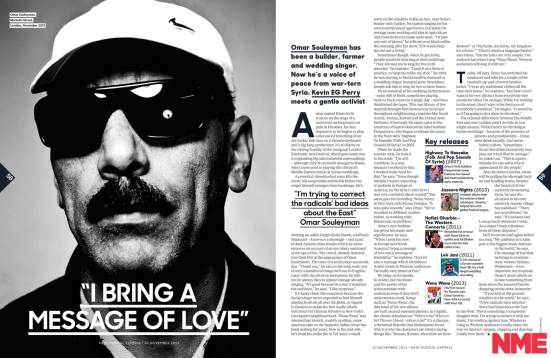 A man named Rizan Sa’id is alone on the stage of a converted underground car park in Hackney, his face impassive as he begins to play a fast-paced reworking of an old Arabic folk tune on a Yamaha keyboard and a big Korg synthesiser. It’s 10:30pm on the closing Sunday of the inaugural London Electronic Arts Festival, which goes some way to explaining the odd industrial surroundings – although they’re no doubt stranger to Rizan, who’s more used to playing this distinctly Middle Eastern music at Syrian weddings.

A powerful, disembodied voice fills the room. His song builds and builds before the singer himself emerges from backstage. He’s wearing an ankle-length khaki thawb, a distinctive keffiyeh headscarf known as a shemagh, and a pair of dark Antonio Miro shades which he never, ever removes on account of an eye injury sustained aged five. The crowd, already driven into the beginnings of a frenzy by the music, set about losing their shit at the appearance of Omar Souleyman. The trace of a smile plays across his lips. “Thank you”, he says, as the song finishes, one of only a handful of things he’ll say in English. Later, with the aid of an interpreter, he tells me he always likes to appear on stage already singing. “It’s good because in a way it surprises the audience,” he says. “I like surprises.”

It’s lucky Omar likes surprises, because he never expected to find himself playing festivals all over the globe, or to release a Four Tet-produced album on Domino Records, where he counts Arctic Monkeys, Franz Ferdinand and Animal Collective among his label mates. Omar, now 45, has lived for his entire life in Tel Amir, a small town on the outskirts of Ras Al Ayn, near Syria’s border with Turkey. He has been singing for his own entertainment since the age of 7, but he spent his teenage years working odd jobs in agriculture or construction to make ends meet. “I’d take any sort of labour,” he tells me over black coffee the morning after his show, “If it would help me eke out a living.”

Sometimes though, when he got lucky, people would let him sing at their weddings. “They used to allow me to sing for five or ten minutes,” he explains. “I took it as a form of practice, to help me refine my style.” By 1994, when Omar was 26, he was starting to find himself in demand as a wedding singer. The demand grew and grew. Nowadays, people ask him to sing for two or three hours.

He recorded all of his wedding performances, sometimes playing back-to-back events in a single day, and then distributed the tapes. This vast library of live material brought him fame across Syria and throughout neighbouring countries like Saudi Arabia, Jordan, Kuwait and the United Arab Emirates. Eventually his tapes came to the attention of Seattle label Sublime Frequencies, who began to release his music in the West. Omar found himself with a new fan base that he’d never expected, and with it his music took on a new significance. “When I perform now in Europe and North America I bring a message of love and a message of friendship,” he explains, “And it’s also a message which introduces Arabic music to Western audiences. I’m really very proud of this.”

When he did make the journey west, he took it in his stride. “I’m self-confident, in a way, because I worked for this. I worked really hard for this,” he says. “Even though initially I wasn’t expecting to perform in Europe or America, by the time I came here I was very self-confident about myself.” The same goes for recording his new record in New York with Kieran Hebden, better known as Four Tet. “It was quite smooth,” says Omar. “We’ve recorded in different studios before, so working with Kieran was no problem.”

Omar sings, as he speaks, in Arabic, but his music and the poetry of his lyrics resonate with audiences even if they don’t understand a word. Songs like ‘Wenu Wenu’, the title track of his new album, are built around repeated phrases. In English, the chorus translates as: “Where is he? Where is he? The one I loved – where is he?”, which is a diacope, a rhetorical flourish that Shakespeare loved, which is why his characters are always saying things like: “Romeo, Romeo, wherefore art thou Romeo?” or “My horse, my horse, my kingdom for a horse”. “There’s always a language barrier,” says Omar, “but my lyrics are very simple. I’ve noticed that when I sing ‘Wenu Wenu’, Western audiences will sing it with me.”

Many of the cultural differences between the Middle East and East London hipsters aren’t as wide as you might assume. While there’s no drinking at Syrian weddings – because of the presence of parents and grandparents – Omar does drink himself socially. Just never before a show. “Sometimes those who drink excessively may pass out when they’re onstage,” he points out. “This is a grave mistake for any artist who is appreciated by the people.” I hope Pete Doherty is taking notes.

Today, off duty, Omar has switched his headscarf and robe for a simple white baseball cap and a brown bomber jacket. “I wear my traditional clothes all the time back home,” he explains, “but here I don’t want to be very distinct from everybody else except for when I’m onstage. While I’m walking in the street I don’t want to be the focus of everybody’s attention,” He laughs. “It would be as if I’m going to do a show in the street.”

After he leaves London, Omar will be pulling his shemagh back on and heading home. Despite the brutal civil war currently devastating Syria, he says the situation in his own relatively remote village has stabilised. “There are no problems,” he says. “It’s isolated and I can go back whenever I want. As a singer I keep a distance from all these disputes.”

He’ll be on the road again before too long. “My ambition is to take part in the biggest music festivals in the world,” he says. The message of love that he brings to everyone: men, women, Syrians, Westerners, even hipsters, is too important not to spread. Omar’s music lets us hear something from Syria above the sound of bombs dropping on the news. He lets us hear humanity. “If you look at the general situation in the world,” he says, “A few radicals have inserted these bad ideas about the East in the West. This is something I completely disagree with. I’m trying to correct it with my music. I’m working against hate. Whenever I sing to Western audiences I really enjoy the way we interact: singing, clapping and dancing. I really love them.”