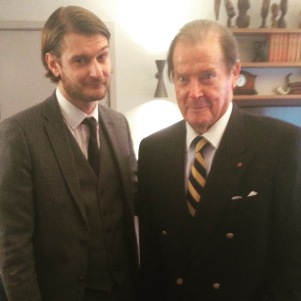 Because of you I grew up wanting to drink martinis in exotic locations. Was being James Bond as much fun as it looked?

I’ve been lucky all my life. From the time I started making movies and television I played heroes. Never had to say too much, got the girl, won all the fights, got to keep the clothes. What more can you ask for?

Not a lot. What is being a man all about, in your book?

It occurs to me that the first three letters of ‘manners’ is ‘man’, and manners maketh the man. It’s about how you’re brought up. Don’t be afraid of people thinking you’re too nice. If people mock you, well, as my friend Tony Curtis would say: ‘Fuck ’em, feed ’em fish.’ That’s a great philosophy in life.

What’s the best piece of advice you ever got?

My first week in theatre when I came out of the army, the director said to me: ‘You’re not very good. Smile when you come on.’ So I smiled, and I’ve spent my life smiling.

You’ve said your favourite of your Bonds is The Spy Who Loved Me. Why?

Obviously the song: ‘Nobody Does It Better’. I mean, modesty forbids me…

It was your idea to drop the fish out of the window of the Lotus after you drive out of the sea, wasn’t it?

That’s right. Cubby [Broccoli, Bond producer] said: ‘Roger, you’re in a car that’s underwater and watertight. How does the fish get in there?’ I said: ‘It’s a movie, Cubby.’ It stayed in, and it gets a big laugh.

You’re always self-deprecating about your acting but there’s a great scene in that film where you tell Anya you killed her boyfriend. You quickly turn from charming to ice cold.

It’s funny you say that, the director Lewis Gilbert always mentioned that scene. Maybe it was lit right! It’s easier to joke about yourself than to go on about having to work hard as an actor. Bullshit. Get up, say the line, don’t bump into the furniture. In the 70s there was an article criticising Laurence Olivier and Marlon Brando for thinking of themselves as ‘great artists’. It finished by saying the only actors who made the profession acceptable, through their self-deprecating humour, were David Niven and Roger Moore. The next morning there was a letter from Niven with the article attached. Across the top he’d written: ‘It pays to be a cunt!’

You got all the best lines as Bond: ‘Sheer magnetism’, ‘Keeping the British end up, sir’. Which was your favourite?

In The Man With The Golden Gun when I’m – when Bond – is asking the gunsmith where something or other is. I line up a rifle right at his balls and say: ‘Speak now, or forever hold your piece.’

What’s the key to delivering a one-liner?

Timing. A great example of that is Jack Benny. The villain says: ‘Your money or your life!… Well?’ ‘I’m thinking it over!’

Forget ‘shaken, not stirred’, how do you make a perfect vodka martini?

I prefer gin. The way to make a proper gin martini is you take a martini glass and rim it with the zest of a lemon. As much zest as you can get. Then put it in the deep freeze. Take a teaspoon full of Vermouth, Noilly Prat, put it in a glass, shake it around and then throw it away. Into that glass you put two jiggers of gin. Take that, put that in the deep freeze. When the time comes, take the glasses out and pour the liquid into the martini glass. There should be a slight film on it, like oil. Put it to your lips and drink it, with three olives on the side.

That sounds quite time consuming, frankly.

If a drink’s worth having it’s worth doing properly. If you’re going to have vodka, by the way, have Grey Goose.

Are you on commission?

You’re a British icon – the spy with the Union Jack parachute – but since Brexit we seem to be a country struggling to figure out who we are. How do you see Britain’s place in the world?

I hope we continue to be important contributors to alleviating the effects of poverty. I don’t like the newspaper campaigns taking the government to task for the amount of money it gives other countries.

Should we be taking in more refugees?

I drive around England quite a lot. We have an awful lot of space, we really do. It’s because we’re a fortunate society that people want to come here. If they’re coming here for non-economic reasons then that’s all the more reason to take them. If they’re coming for economic reasons and have something to contribute then I don’t blame the poor bastards for getting out. They’re doing exactly what the British did 400 years ago.

You recently turned 89 – what’s the secret of your longevity?

‘He never left a bill unpaid.’