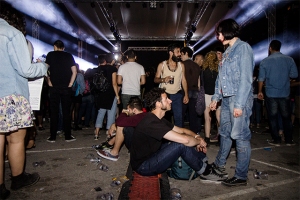 In the last five years, Greece has become as synonymous with their interminable financial crisis as it has always been with democracy, philosophy and yogurt. Just last week, the left wing government lead by Syriza put two fingers up to the International Monetary Fund and told them that they’re not going to pay them back the €300m they were supposed to until at least the end of June, when they absolutely promise they’ll come up with the full, erm, €1.5billion they now owe them.

Even the world’s sharpest economists seem unsure about what the future holds for the country. This cloud of uncertainty that hangs over Athens really sucks for young people, because they just want to do the same things young people everywhere want to do: get drunk, smoke cheap cigarettes, buy inexplicably pricey trainers, and awkwardly make out to Perfume Genius.

That’s why this weekend some four thousand of them headed to Plisskën Festival at the Hellenic Cosmos Cultural Centre in downtown Athens. There they moshed to Savages, lost their shit to Evian Christ, and generally tried to ignore the endless headlines telling them how monumentally fucked they are. That was, until I turned up with my dictaphone and started reminding everyone about it. Here’s my conversations with the kids and performers on site, about what it’s like trying to have a good time when your entire country is, like a geopolitical Azealia Banks, broke with expensive taste.