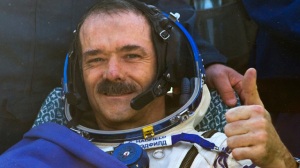 How did you end up playing David Bowie’s ‘Space Oddity’ on the International Space Station?

I recorded a Christmas Carol up there and my son said: “That’s ok, but people really want to hear ‘Space Oddity’.”

It’s an odd, late-Sixties druggy tune about an astronaut dying in space. Why would I record that? He said: “Dad, you’re not doing it for you. You’re doing it for everybody else.” I said if he rewrote the words so that the astronaut lives, I’d record it.

Was Bowie happy for you to do it?

I called Bowie’s legal team and told them I was phoning from outer space. I thought it might help. We got permission and Bowie heard it and said he loved it, which was great.

Were you aware how many people were watching it?

It went crazy! I was watching from orbit, but then I had to fly the shuttle home. When I landed, after thundering through the atmosphere and thumping back to earth, the first thing anyone said was: “Hey Chris, I saw your music video!”

Lend me your ears and I'll sing you a song, and I'll try not to sing out of key... 📸 @deanchalkley_
Highlight of a very fun #NMEAwards2020 was drunkenly telling @robynkonichiwa about getting lost at Burning Man and eventually finding my way back to @queendickhumans and seeing @joshmheller dancing to 'Dancing On My Own' and it being the happiest moment of my life.
Mia Goth laughed politely when I said her fluorescent Valentino gown would be great for cycling at night, and for that I thank her. Here it is in all its glory for this week's @eveningstandardmagazine cover story. 📸 @amanda_charchian
Went to Oakland. It rained. Welcome to paradise.