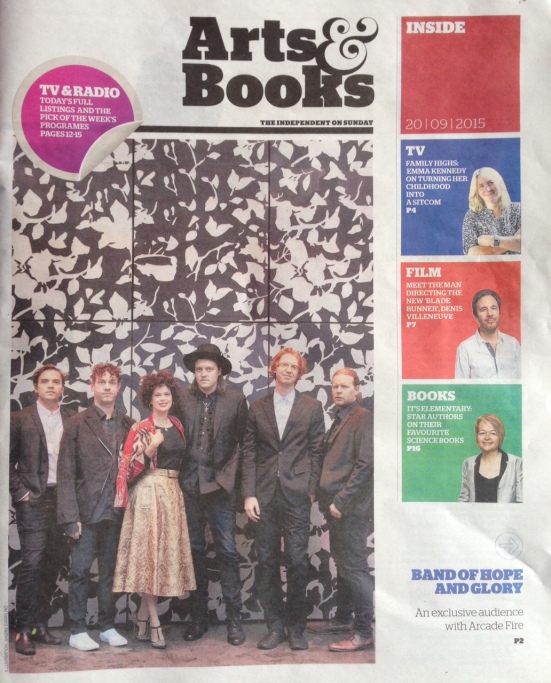 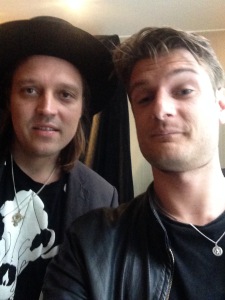 It’s late in the evening after the premiere of The Reflektor Tapes at the Toronto International Film Festival, and Arcade Fire are throwing a party at Rhum Corner, a local Haitian bar. Win Butler, unmissable at 6ft 5in in a widebrimmed hat, works the room, thanking those who worked on the film and hugging friends. Beside him, his wife and co-bandleader Régine Chassagne dances to the insistent rhythm coming over the soundsystem. “This is rara music,” she shouts over the beat. “You hear it all the time in Haiti.”

The Reflektor Tapes is an oblique, impressionistic documentary about the making of Arcade Fire’s fourth album and, like this bar, it’s full of visions of Haiti. Fittingly for a film about a record Butler called a “mash up of Studio 54 and Haitian voodoo,” director Khalil Joseph eschews a straightforward making-of narrative, and instead offers glimpses of what the band saw when visiting the island shortly after winning the Grammy for Album of the Year for The Suburbs in 2011. Butler and Chassange had first travelled to Haiti in 2008 and had been involved in charity work there since long before the devastating earthquake of January 2010.

The visits were something of a homecoming for Chassagne, whose parents fled the country in the 1960s when President François “Papa Doc” Duvalier’s Tonton Macoute death squads were murdering his political enemies. Understandably, they were never keen to return themselves.

“I never knew my [paternal] grandfather, because he was taken away, and my mother’s extended family were massacred as well,” says Chassagne. “My mother had a very traumatic experience, so for her it was never an option to go back. After she passed away, I decided to go in 2008 because I wanted to see it for myself. It was only when I got there that I began to understand my own tics. Everything made so much sense.”

Chassagne and Butler, the couple at the heart of Arcade Fire, met while studying at Montreal’s McGill University in 2001. They wrote a song on the first night they spent together (“Headlights Look Like Diamonds”), married in 2003, and released the first Arcade Fire album Funeral the following year. It included a song called “Haïti”, which Butler encouraged his wife to write after becoming fascinated with the stories he’d hear around her uncle and aunt’s dinner table while celebrating Haitian Christmas. “It was always something that she was sort of scared to talk about,” says Butler. “I remember writing that song with Regine and really pushing her to talk about this stuff.”

Despite Chassagne’s family background, Reflektor was accused in publications, including The Atlantic, of cultural appropriation. In The Reflektor Tapes, Chassagne discusses the fact that her immediate family are all darker skinned than she is, suggesting that these same criticisms wouldn’t have been levelled if she didn’t appear to be “white”. In Toronto, she argues, this shouldn’t matter anyway. “It’s interesting because I see this criticism more from people who are not Haitian, or who couldn’t even pinpoint which part of the songs have a Haitian influence,” she says. “I think it’s silly to put barriers between musical genres. Every kind of music is a combination of different influences. Music is a language that everybody talks. It brings people together, and that’s the point.”

Even if The Reflektor Tapes marks a full stop to the band’s work around their last album, they say it won’t be the last time they’re influenced by Haitian musicians. “You can’t unhear the Beatles,” reasons Butler. “It’s not like we ever had any interest in making this our ‘Haitian’ record. If I didn’t talk about it, I don’t know that people would have necessarily picked up on it, except there’s congas on there.”

As well as capturing the band’s travels in Haiti, and recording sessions in Jamaica and Montreal, The Reflektor Tapes teases out the band’s intellectual journey since 2011, notably Butler’s fascination with Søren Kierkegaard’s essay “The Present Age”. The film offers the quotation: “The present age is one of understanding, of reflection, devoid of passion, an age which flies into enthusiasm for a moment only to decline back into indolence.”

While that line sounds as if it could have been written while Kierkegaard was casting his eye down his Twitter feed, it dates from 1846. In the past Arcade Fire have been cast as anti-technology because of Facebook-baiting lyrics like “We’re so connected, but are we even friends?” on Reflektor’s title track. However, Butler says that idea is false and agrees that our click-short attention spans can’t be blamed on the internet or smart phones. “I don’t give a shit about iPhones,” he says. “When I was a kid it was: ‘TV is going to rot your brain’. Every era has something to take its place.”

Butler and Chassagne laid their technology-friendly credentials bare in March when they became two of the few rock musicians involved in the launch of Jay Z’s Tidal streaming service. The event ended up being roundly mocked for presenting millionaire artists as charity cases asking for the public’s support, and with double the monthly subscription price of main competitor Spotify, the app has so far failed to take off.

Butler says he doesn’t regret their involvement, but he accepts the launch gave an unfortunate impression. “None of the artists knew anything about the PR,” he says. “It was a poorly managed launch, but conceptually the thing that we liked about Tidal was that it’s HD streaming quality.”

He lays the blame for Tidal’s struggle squarely at the door of major labels. “They dictated that Tidal has to cost $20,” he says. “The major label music industry has completely ruined every aspect of their business. At every step of the way they’ve had the tools offered to them to create an industry that works, and they’ve completely blown it. That’s why we never had any interest in signing a contract with one of these companies because they’re clearly completely clueless.”

Having kept the band resolutely independent, tied only to tiny indie label Merge, Butler defends their involvement with Tidal as a way of seeking solutions that the music industry have missed. “It seems silly, for fear of being embarrassed, to not at least sit at the table with Jay Z, Kanye and Daft Punk and talk about art and music and how it’s going to be distributed,” he says.

In a little over a decade, Arcade Fire have grown from indie eccentrics into one of the biggest bands in the world – and Butler shows no false modesty in his belief that they’ve earned their place, literally, at music’s top table. “I think that we’ve ended up there because we work really hard and our records are really great,” he says, matter-of-factly. “All I care about is the work. I don’t care if people recognise me when I leave this building. I’d really prefer if they didn’t, but I really do care about the work. David Bowie came to our first show in New York, which blew my mind, but now I see him as … not a contemporary, but like a professor. I see our band as trying to carry on that same spirit of what Bowie was doing, or Bruce Springsteen, or Radiohead, or any of these bands that were bold enough that I heard them in suburban Houston.”

At one point in The Reflektor Tapes, Butler’s brother and bandmate Will says the band would be happy for their music to be remembered anonymously. Butler agrees with the sentiment. More important than any personal recognition, he says, is the idea that their own songs can become part of that chain of musical influence.

It was, fittingly, in Haiti that Butler and Chassagne saw that in action when, several years after that first 2008 trip, a group of teenagers dragged them to watch their band practice in Jacmel, southern Haiti. “Their apartment looked like mine when I was 19,” remembers Butler. “There was a drum kit in the corner and a bass. These kids from rural Haiti were playing, and it was Arcade Fire inspired. I mean, the name of the band is Fire Flame. It was the craziest thing. One of the kids got into Neil Young because he got on some bad internet connection in Haiti and found Arcade Fire and followed a link and then learned Neil Young songs on an acoustic guitar.”

A grin as wide as the brim of his hat breaks across his face. “That is cool,” he says. “To me, that’s the point of the whole thing.”

Originally published in The Independent, 20 September 2015.