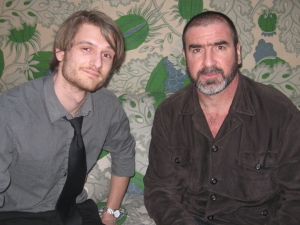 The man the Old Trafford terraces still call “King Eric” wants a cigarette. GQ.com is stood with Cantona by the pool in the basement of Piccadilly’s Haymarket Hotel where a family of swimmers can’t quite believe what’s happening around them. The footballer whose talent, arrogance and occasional acts of uncontrolled aggression defined the early years of the Premiership has just appeared from one of the pool’s side-rooms, possibly a sauna, out of which in the last three-quarters of an hour both Radio One’s Edith Bowman and David Frost have emerged looking equally awed. The Frenchman is patting his pockets distractedly until one of his team of press handlers scurries over to stop him. “You can’t smoke down here!” she whispers urgently.Cantona looks at her, baffled. “But why not?” he asks with a shrug. He makes his apologies and disappears off in search of Frédéric Schoendoerffer, the director of his new film Switch  and the keeper of his tabs. A couple of minutes later we are safely ensconced in a quiet side room where Cantona, sipping an espresso, apologises for the delay. He eases back in his chair, tilting his chin skywards contemplatively and sets about expounding his philosophy that everything – football, acting, even cooking – is simply another way of expressing your true self.

GQ.com: Detective Forgeat, the character you play in Switch, always has a cigarette in his hand. Do you smoke as much as he does?
Eric Cantona: It’s to show that he is a free person. It’s not because you like adventure that you smoke but I think it shows the freedom that Forgeat has and where he puts his priorities. His priority is his job and he’ll do anything that helps to inspire him to do it well. He doesn’t obey the smoking ban. For me, I don’t like it when there is too much interference in our lives. We’re not children. It is our own life in our hands.

What advice would you give to someone like yourself who wants to act but is not a trained actor?
It’s a discipline. For me football, cinema, theatre or photography are all ways of expressing ourselves. Of course, if you want to be a photographer you need to learn the techniques. You must learn how to play the sport but I don’t think the technique is the most important thing. Sometimes it’s nice when it’s not so perfect. It’s like beauty. If someone is too perfect they won’t look good. Imperfection is important. That’s why I think it’s important to learn the techniques but to know when to stop using them. We can be eaten by techniques and forget what we have inside of us.

If you could have acted in any film, which would it be?
I would like to have worked with [Pier Paolo] Pasolini. In Oedipus Rex, maybe.

What was the best thing about playing football?
Expressing myself. Of course, my dream was always to play for the best teams and with the best players but I loved to express myself through the sport.

Can you recommend a good book?
Narcissus and Goldmund by Hermann Hesse. It’s about our desires and the small voice inside us that tells us not to follow them. It’s about that rivalry between the two people inside each of us.

What music do you listen to at home?
I love the singer-songwriter Sophie Hunger, particularly her last two albums 1983 and Sophie Hunger.

What achievement are you most proud of?
I try to be honest. I’m honest with people and I try to respect myself. If I respect myself and I am honest with myself, then I will respect other people. Of course, I don’t do everything perfectly. I’m proud that I’ve tried many things. I’ve shown that as people we can try anything.

What is the best advice you’ve ever been given?
I don’t remember any advice. I listen to my own experience. My mind says to me that life is just “le passage” – a journey. You are here today, but tomorrow… you don’t know. You must live with a feeling of freedom. You are not “appartenir“. You don’t belong to other people, your environment or the world around you. You are free. That helped me to achieve a lot of things.

What is the best thing you can cook?
Dorado. It’s a fish. The secret is in the filling.

The filling?
Non, the feeling! I know how to cook it, but if I told you how to do it, then yours would be different to mine. It’s all about the feeling.