It was only a matter of time before Iceland went bust. For decades, the people on this volcanic island in the middle of the Atlantic had made their money from fishing and aluminium smelting. Then, in the 2000s, they started making money from international finance. Lots of money. By 2007, Iceland’s three biggest banks were worth $140bn, 10 times the size of the country’s economy. The banks pulled this off by promising unrealistically high rates of return to foreign clients and buying up companies, real estate and even football clubs around the world. There was no way they could keep paying their bills and so, on 6 October 2008, the whole house of cards came crashing down overnight. Billions were wiped out in the flicker of a computer screen as the global financial crisis took hold.

Not that you’d notice walking around Reykjavik today, where an army of cranes pluck the city into new shapes. On Laugavegur, the main drag, tourists pose with Vikings and trolls, while restaurants lure in hipsters with gourmet hot dogs slathered in pulled pork. At night, the bars throng with Icelanders taking great pleasure in introducing their visitors to Brennivín, the powerful local schnapps. Clinking glasses punctuate spirited chatter.

And the reason for the cheery scenes? Instead of licking their wounds, this country of 329,000 people took it upon themselves to find a fix, creating a blueprint for how to plot a 21st-century economic recovery in the process. 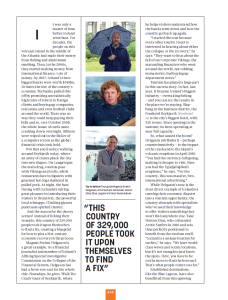 Magnús Sveinn Helgason is a great example. As a financial journalist and member of Iceland’s Althing Special Investigative Commission on the Collapse of the Financial System, Helgason has had a front-row seat for the whole ride. Nowadays, he gives ‘Walk The Crash’ tours of Reykjavík, where he helps visitors understand how the banks went down and how the country got back up again.

“I started the tour because every other tourist I meet is interested in hearing about either the collapse or the recovery,” he says. “They want to hear about the fall of our corporate Vikings, the marauding financiers who went around the world, not robbing monasteries, but buying up department stores.”

Tourism has played a huge part in this success story. In fact, last year, it became Iceland’s biggest industry – overtaking fishing – and you can see the results in the place we’re staying. Slap-bang in the business district, the Fosshotel Reykjavik is the city’s biggest hotel, with 320 rooms. Since opening in the summer, its been operating at near full capacity.

So, what caused the boom? Helgason attributes it – perhaps counterintuitively – to the impact of the crash and to the island’s volcanic eruptions in April 2010. “You had the currency collapsing, making it cheaper to visit, then you had the Eyjafjallajökull eruptions,” he says. “For the country, this was massive, free, international advertising.”

While Helgason’s tour is the most direct example of Icelanders turning their economic disaster into a tourism opportunity, the country abounds with specialists who’ve used their knowledge to offer visitors something they won’t find anywhere else. Take Hreinn Elías, who cofounded Arctic Surfers in 2010 and was thus perfectly positioned to benefit from the tourism swell. “Iceland is a unique location for surfers,” he says. “We have world-class waves and scenic locations, but it’s not enough to just know the spots. Here, you have to be on the move to find the best surf. That’s what people come to us for.”

Established destinations, like the Blue Lagoon, have also benefitted from this upswing in attention. Founder and CEO, Grimur Saemundsen, who’s currently building a luxury hotel at the lagoon, to open in 2017, says: “The last five years have been an adventure for us. It’s undisputed that the growth in tourism since 2010 has played a major role in reestablishing the economy of Iceland. We’re now the biggest sector in the economy and the biggest employer. The banking crash created a vacuum that the tourism industry stepped into.”

While the island’s unique geography is part of its draw, the country also has a busy cultural calendar. Here, its small size is a definite advantage. Halla Helgadóttir, who runs Iceland’s design week in March, says that designers from a variety of disciplines come here to share ideas; while Stella Soffía Jóhannesdóttir, of the Reykjavik International Literary Festival, tells an anecdote that illustrates just how intimate their events are. “When David Sedaris spoke here, he said he was used to audiences of 3,000. Here, he spoke to 100 people,” she says. “That makes our festival an opportunity to meet your favourite authors in very unusual circumstances.”

Mingling among the tourists heading to Iceland since the crash have been some of Hollywood’s top directors. Prior to 2006, only three foreign films had been shot in the country. Since then, it’s provided locations for almost 20, including Christopher Nolan’s Batman Begins and Interstellar, Ridley Scott’s Prometheus and several seasons of Game of Thrones.

“More than 14% of visitors come here because they saw Iceland in a foreign film or TV show,” says Iceland’s film commissioner, Einar Tómasson. “With things like Game of Thrones filming here every year, I think people see the great landscapes and think, ‘Let’s go there. It’s so different’. One of our strengths is that our locations are so diverse. Within two hours, you have glaciers, lagoons, waterfalls, rivers, lakes, green valleys, black deserts and lava sculptures. It’s all packed together.”

As well as the locations, film studios also come in search of technical expertise. Daði Einarsson opened a division of visual-effects studio Framestore in Iceland shortly before the crash in 2008 and was able to buy the company out to form independent studio RVX in 2012. They’ve since provided effects for films including 2 Guns and this year’s mountaineering epic, Everest.

Einarsson says that, in the years following the crash, Icelandic companies benefited from a surge of talented workers returning to the labour market. “There had been a huge brain drain into the banking sector from basically everything else,” he says. “Nobody could compete with it in terms of wages or the sexiness of the industry at that time. Obviously, the crash was a catastrophe in many ways, but on the other side, it’s caused an influx of talent back into the workforce to do new things. After a year or so, there were a bunch of new entrepreneurs and start-ups. In some ways, we tried to create our way out of trouble.”

One of those new start-ups was Plain Vanilla, an app company that created QuizUp, the fastest-growing iPhone game ever. Thor Fridriksson founded the company in 2010 and agrees with Einarsson that the crash created the incentive for people like him to follow their dreams. “If the crash hadn’t happened, and I was coming back from Oxford with student debt on my back, and had the option to go into a well-paid job at a bank, I probably would’ve done that,” he says. “It wasn’t on offer, so I did something else. The worst thing for entrepreneurism is if there’s too much luxury. It’s almost always born out of some sort of need.”

It’s not just in entertainment and arts that Iceland’s entrepreneurs have flourished. The country already generates all of its electricity from renewable sources, like hydropower and geothermal power, so it’s no surprise it’s also leading the way in carbon-capture innovation.

In 2012, Carbon Recycling International started producing liquid fuel at the first commercial carbon-dioxide recycling plant in the world, located in Reykjanes. This technology could have a huge impact on climate change and may even one day be used to help astronauts make the fuel they need to return from Mars. The company’s director of business development, Benedikt Stefánsson, argues that it was the crash that helped them secure the support they needed. “Before the crash, nobody bothered to think about making our own fuel, because it was easier and cheaper to buy oil,” he says. “Afterwards, people realised that maybe we should start thinking long term about investing in this sector.”

Iceland’s entrepreneurial spirit led them into even more unlikely arenas. Out near Keflavik Airport sits a unique factory belonging to Algalif. Each week, it harvests 45kg of algae in 12,000 litres of water, from which they can extract 1.6kg of astaxanthin, a substance which is used as a food additive for salmon (it makes them pinker) and as a dietary supplement for humans (it’s an antioxidant – their pinkness remains unchanged). This may seem like a niche business until you consider the returns. “The retail price of astaxanthin is between $150,000 and $250,000 per kilogram,” points out COO Orri Björnsson as he shows me around the algae-filled pipes. “It’s more expensive than cocaine.” 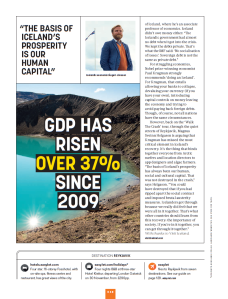 What lessons can other countries learn from Iceland’s phoenix-like rise? Economist Ásgeir Jónsson believes it’s about toeing the line. “When the IMF came to Iceland, we did everything they asked us to do,” he says, when we meet in his book-lined office at the University of Iceland, where he’s an associate professor of economics. Iceland didn’t owe money either: “The Icelandic government had almost no debt when it got into the crisis. We kept the debts private. That’s what the IMF said: ‘No socialisation of losses’. Sovereign debt is not the same as private debt.”

For struggling economies, Nobel prize-winning economist Paul Krugman strongly recommends ‘doing an Iceland’. For Krugman, that entails allowing your banks to collapse, devaluing your currency (if you have your own), introducing capital controls on money leaving the economy and trying to avoid paying back foreign debts. Though, of course, not all nations have the same circumstances.

However, back on the ‘Walk The Crash’ tour, through the quiet streets of Reykjavik, Magnus Sveinn Helgason is arguing that Krugman has missed the most critical element in Iceland’s recovery. It’s the thing that binds together everyone from Arctic surfers and location directors to app designers and algae farmers. “The basis of Iceland’s prosperity has always been our human, social and cultural capital. That was not destroyed in the crash,” says Helgason. “You could have destroyed that if you had ripped apart the social contract and imposed brutal austerity measures. Icelanders got through because we really did feel that we were all in it together. That’s what other countries should learn from this recovery: the importance of society. If you’re in it together, you can get through it together.”