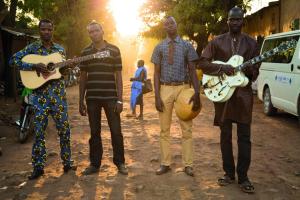 Like money, oil and funny cat gifs, music is such a basic part of our shared culture that it’s hard to imagine what society would feel like without it.

Yet in Mali in 2012, music was banned outright in the north of the country. Following a presidential coup, Islamist extremists took control of some regions and swiftly set about implementing an extreme version of Sharia law that outlawed all forms of music. They destroyed radio stations, burned instruments and tortured musicians. Yet as they were spreading their darkness, the jihadists could have had no idea that they would end up inspiring one of the most visceral bands to emerge this year: Songhoy Blues.

Today, Johanna Schwartz’s remarkable documentary ‘They Will Have To Kill Us First’ is released in the UK. The film follows the stories of Songhoy Blues as well as fellow musicians Kharia Arby, Fadimata “Disco” Walet Oumar and Moussa Sidi as they fight to keep their music alive and perform the first public concert in Timbuktu since music was banned.

Oumar Toure, one of Songhoy Blues’ guitarists, tells me he believes the Islamist mujahedeen feel threatened by music. “The mujahedeen hate the influence that Western music has,” he explains. “The philosophy behind it, the entertainment and leisure it promotes. For them the only way to control the city is to control the media and to put their propaganda on the radio.”

Oumar points out that it was only after the band members were forced to flee to the Malian capital Bamako, in the south of the country, that they even thought about starting to make music together. “The band started after the meetings we had during the occupation of the northern in 2012,” he says. “In those meetings we were asking what we can do for the north and the idea came about to create a band to express ourselves and what is going on here.”

His bandmate, Garba Toure, adds that it remains too dangerous to return to their homes in the north, although they’d like to. “”To return whilst there are still weapons and attacks that are increasing day by day and there is no stability?” he asks rhetorically. “Right now, it’d be difficult to return.”

However, he adds that their dream is to see music return to all the places where the extremists have banned it. “Of course!” he says. “Music is one of Mali’s greatest cultural resources and without it we can’t celebrate weddings, baptisms, birthdays, every day life, like we want to. Conflict needs music for resolution, that’s why we play.”

For Oumar, it’s through continuing to perform and by refusing to be silenced that Songhoy Blues can help music return to their hometowns. “Our music denounces the justification which various groups use when hurting people,” he says. “The rebels have their Kalashnikovs. For us, our guitars are our Kalashnikovs. It’s how we can fight back.”