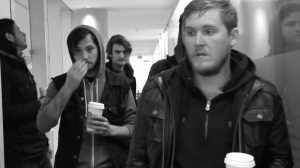 On a breezy spring afternoon, Brian Fallon is holding court outside a scruffy café in central London. Over cigarettes and “awful” coffee, The Gaslight Anthem leader is setting out the game plan. “With this record we wanted to recapture some of our earlier stuff,” he says of forthcoming album Handwritten, out July 23, wistfully recalling the basements and barrooms of New Jersey where the band first cut their teeth. “We wanted to play fast and have people sing along because that’s what our community was about. It was about having a blast in a basement. What would it be like if that basement got 50 times bigger? How cool would that be?”

His bandmates, guitarist Alex Rosamilia, bassist Alex Levine and drummer Benny Horowitz, nod knowingly. They’ve already seen it happen once. At the beginning of 2008 Brian was earning more from construction work that he was from the band. When ‘The 59 Sound’ was released later that year by indie label Side One Dummy they hoped it might sell 100 copies. It did. Then it sold 249,900 more, including 65,000 in the UK. That whirlwind of success changed everything fast, and Brian admits there were times he forgot he was supposed to be having fun: “There was a period when it was tough. We were maybe taking ourselves too seriously and taking the press too seriously. It was taking the light out of the fact that I don’t have to go on a roof and pound in nails anymore. I’d say to myself: ‘I’m sorry you’re tired of answering Bruce Springsteen questions, but it’s a lot cooler than what you were doing before.’”

Those Springsteen questions were hard to shake off for a while, particularly after the Boss joined them for their Glastonbury set in 2009 and then invited Brian to duet with him during his own headlining slot. While the band appreciated his patronage, they’ve always been eager to step out of the shadow he casts across their home state. That ambition led them to sign with Mercury Records this year, but it wasn’t a decision they took lightly. “We didn’t know what was going to happen,” Brian explains. “How many times have you seen a band sign to a major label and the album doesn’t even come out? All we knew was that we’d better write a record that we’re happy with or else we’re in trouble. I don’t want to have 50,000 people singing my songs if I don’t like them. I’d rather be poor playing songs I love than filthy rich playing songs I hate.”

The band have never been shy about admitting that they’d love the chance to play to huge crowds, and this time round the record feels unashamedly built for stadium shows.  “We make no bones about that,” Brian nods. “I would love to play Wembley Arena or those big Foo Fighters-style shows. It’s gotta be so much fun. You’ve got to be conscious about it, though. Look at The Clash. They had a message. If hundreds and thousands and millions of people are listening to what you say, and you’re saying: “Hey man, you should get back to your records and the joy you found in music.” That’s a cool message.” Benny agrees with a grin: “It’s better than just saying “Here’s my cash”. We’re not singing about boats and ho’s.”

What the band are singing about on this record is the loss of romance and mystery in an era when all human knowledge is just a tap of the fingers away. Benny says his favourite ever Gaslight Anthem lyric is this one, from album closer ‘National Anthem’: “Now everybody lately is living up in space/Flying through transmissions on invisible airwaves/With everything discovered, just waiting to be known” As he points out: “The internet has completely changed what we can comprehend and the way we comprehend it, but it makes certain things feel artificial.”

Their no-frills authenticity defines them as a band, but it feels like a shame that Brian has felt the need to dial down some of his literary references in an attempt to broaden the band’s appeal. Naturally, he disagrees: “We didn’t want to make a record that’s above people’s heads. We wanted to make it in the language that we speak. Straight to the point, trim the fat. There’s no need to prove that we’ve read TS Eliot. Yeah, we’ve read it, and yeah, it’s cool, but we don’t need to prove that.”

Having felt that 2010’s ‘American Slang’ had been waylaid by their disparate personal lives, for this record the band took the decision to move to Nashville as a unit. They rented a house where they could work 24 hours-a-day and holed themselves up with legendary producer Brendan O’Brien, whose CV includes the likes of Springsteen and Neil Young. The result is that on tracks like ‘45’, ‘Keepsake’ and ‘Too Much Blood’ the band’s message comes backed by a full-throttle all-American rock sound that sits somewhere between Tom Petty’s ‘Full Moon Fever’ and Pearl Jam’s ‘Backspacer’.

The band have an unabashed love of a good pop hook, and on ‘Handwritten’ they aren’t afraid to be catchy. “Music doesn’t have to suck in order to be cool,” says Brian. “Don’t forget, Radiohead wrote some catchy songs. I’m not just talking about ‘Creep’, I’m talking about ‘Karma Police’ and ‘Fake Plastic Trees’. Those are catchy pop songs! It gets the point across. For instance, our song ‘Here Comes My Man’ is somewhere between ‘I’m Waiting For The Man’ by the Velvet Underground and ‘Single Ladies’ by Beyonce. I’m totally serious. Those two songs somehow mashed up in my brain. It’s the first time I’ve written from a girl’s point of view, and it’s basically Lou Reed meets “If you liked it then you should have put a ring on it.””

As Fallon knows, groups like Radiohead and The Clash have shown that it’s possible to tilt at being the biggest band in the world without compromising your song-writing, your experimentalism or your ideals. That’s the reason The Gaslight Anthem got together in the first place. Brian still remembers a mixtape a friend of his mother gave him when he was 12, filled with bands like Bauhaus, The Ramones and The Replacements. “I’ll never forget listening to that stuff on headphones. I remember thinking: “Did those bands know when they were writing that stuff that there would be kids who’d make those songs their lives?” The most important thing being said was not from a Congressman on television, it was a band from wherever saying it to you in your headphones. I always hoped, maybe presumptuously, that people would do that with our band.”

On ‘Handwritten’, The Gaslight Anthem’s atavistic message is one of nostalgia for the authenticity of the offline world. They want to remind people how much fun it can be to turn off their computers and experience something real. Brian grins as he spells it out: “We just want to get everybody in the room together, singing along and having a good time because in this age that doesn’t happen very often.”