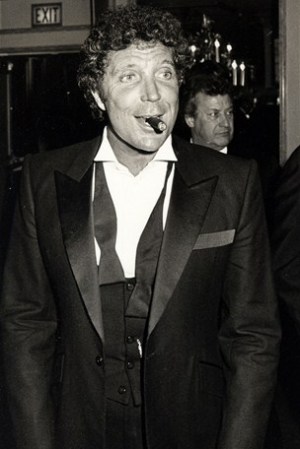 “My favourite line on the album is from Leonard Cohen’s ‘Tower Of Song'” says Tom Jones with a knowing chuckle. “‘My friends are gone / and my hair is grey’ That rang a bell as soon as I heard it.” Well, Mr Jones, at 71 it’s not unusual. Having removed his ill-advised dye, his hair is now closer to salt-white and the friends that are departed – Elvis Presley, Frank Sinatra, Dean Martin – still pepper his conversation. Jones’s life-story is the outlandish tale of a young lad from Pontypridd in the Welsh valleys whose booming voice took him all the way to the Rat Pack’s Las Vegas turf. Now he’s not only a judge on the BBC’s The Voice but also releasing his 38th album, Spirit In The Room. For this latest venture he’s recruited the drummer from hip LA artrockers Warpaint and is covering Tom Waits. “You’ve got to do it in a cheeky way,” he explains of Waits’ song “Bad As Me”. “You don’t want to make it sound blasphemous when you’re singing about the ‘mother superior in only a bra’.” We caught up with the full-throated crooner at the Charlotte Street Hotel in London’s Bloomsbury to discuss the advice Sinatra gave him, the importance of being able to tie a bow tie and why he’s never had to cook a single meal in his life.

GQ.com: Which singers do you consider particularly stylish?
Tom Jones: Dean Martin always dressed very well but then he was a good looking fella with a good physique so he could wear anything. I remember talking to him after he came over on the Queen Mary because I’d never been on a big ship. He said: “The only trouble is the captain invites you to sit at the top table and you’ve got to wear the bloody tuxedo! I wear a tuxedo onstage I don’t want to be wearing it out for dinner. You’ve got to look like Cary Grant all the time!” Dean was always very stylish, as was Sammy Davis. Frank Sinatra was always wearing a tuxedo but I thought he was quite conventional.

What about Elvis?
Elvis was always over the top. It’s funny that in those days people who wanted to look like Elvis would wear leather jackets and jeans, because that’s what he wore in his movies. In real life, Elvis never wore denim. He thought they were work clothes. When he had to wear them, when he was driving a truck, he would do but he always loved the way black entertainers dressed. He styled himself on them, because he wanted to be flamboyant. That’s why he had that gold lamé suit! He designed his jumpsuits himself. He always said, “If you’re going to be a star, you should look like one.”

Did that influence your own look?
I was a teddy boy in the Fifties, so when I first started wearing long trousers they were tight. In the Sixties it stayed like that. The jackets got shorter, the shoes changed from beetle-crushers to winklepickers… but the trousers stayed tight. I think the first time I ever wore a tuxedo was when I played at the Talk Of The Town in 1967, because it was a nightclub and that was the thing to do.

Can you tie your own bow tie?
I had to learn to do that, especially when I had my own TV show in the late Sixties. I used to [perform] a concert slot so I wanted to get that tie off. You don’t want to be unclipping a fake bow tie. You still see people do it now – they unclip it and they’ve got the bloody whole bow hanging on one side! I had to practise. I remember doing it over and over again in the makeup room. Once you see a real bow tie tied, it’s definitely got a flair to it.

Where’s the strangest place you’ve ever heard your music played?
It’s always good to hear it at festivals. When you hear “Delilah” coming over the airwaves it’s such an “up” tune and it’s great to see people’s reactions to it. They sing “Delilah” at rugby matches as well, of course! That’s always a kick.

What’s the biggest misconception about you?
I’m not a bloody coat-rack for underwear! You don’t have to throw them when you come and see me. Have a listen first. I think the image sometimes overshadowed the talent. I was partly to blame for that, of course. [Roguish smile] You can’t record a song like “Sex Bomb” and then complain that people see you in that way. The biggest misconception about me is that my audience is 90 per cent female. I think the truth is closer to 50-50.

Has The Voice meant that you’re being recognised by a new generation?
Yes, there were some kids who wanted a photo when I flew in from LA last week. I know that when we were talking about putting the judges together they wanted a cross-section of people. They’ve got me there because I’ve been around so long, but it’s nice to know that the kids are taking notice not just to Jessie J, Will.I.Am and Danny O’Donoghue. That’s nice. That’s flattering.

Did you have any doubts about getting involved?
This is the first time I’ve ever been involved in something that’s not just about me. Over my career, all the decisions I’ve had to make about song choices and producers were all about my next record. Now I’m trying to pass that onto other people. That’s new – you’re throwing yourself out there. When I was watching the blind audition shows back, I noticed that there’s a girl on show three who’s singing great and none of us turned around! The viewing audience must have thought there was something wrong with us. The thing is, at first they were calling me “trigger happy” because as soon as someone started singing I’d be hitting the button. The producers told us we had to slow down because we had a lot of people to listen to and we could only choose 10 people. You can’t explain all that to the contestants or to the viewers!

What’s the best advice you’ve ever been given?
Frank Sinatra said to me: “You don’t have to push the shit out of every song you sing, you know. There’s light and shade. Preserve your voice.” At the time I said, “I know what I’m doing” but the longer I kept going I realised that Frank was right. You don’t have to bite the head off the microphone on every song. That’s youth, I suppose. [Actually], the first piece of good advice I was given was when I was working in a paper mill. I got married when I was 16 so I had to do shift-work to make ends meet.I was working on this machine and this old fella – I say old fella, he was probably younger than I am now – was working on the next one. He said “The word round here is that you can sing. Why don’t you go for it?” I replied that it would happen eventually and somebody was bound to notice me. He said, “Don’t hang about! Time will run, believe me. You can always do this if you fail, but give it a go for Christ’s sake!” That made me think.

What’s the best way to impress a woman?
To talk to her and not be moody. It’s important not to be too moody.

What’s your drink of choice?
Champagne. Dom Pérignon, to be precise. I used to be a beer drinker, so real ale still stands high on my list. I love going into a pub and seeing the pump in action. That’s a close second…

What’s the best thing you can cook?
Oh God, I can’t cook. It’s coming from that bloody working class background. My father said, “Don’t go in the kitchen.” I used to help my mother when I was a kid and I love food. I love going into restaurants but if I had to cook for myself… Christ. I suppose I could grill a steak or something. I could boil an egg. I’ve never had to. [Pause] I can make a sandwich.

Can you recommend a good book?
I love British history. I liked The Rise and Fall of the British Empire by Lawrence James and Victoria’s Wars by Saul David. Then again, a book of jokes is pretty good too.

How many watches do you own?
Oh, Christ. I tried to count them but I haven’t got around to them all yet. I have a weakness for watches. I have to stop myself buying more. Today I’m wearing a Santos by Cartier.

Which singers have the greatest voices of all time?
Jerry Lee Lewis, Elvis Presley, Fats Domino, Chuck Berry and Gene Vincent would be my five. They each had something unique at the time. Chuck Berry’s such a great lyricist. I know Chuck and the thing about him is that he doesn’t know what’s so great about them. He’s that kind of guy. In old songs they used to repeat lines a lot, but with Chuck Berry every note was a new word. There’s a song called “Let It Rock” about a guy working on a railroad, and in three verses he paints such a picture. [sings low] “Later in the evening when the sun is sinking low / All day I been waiting for the whistle to blow / Sitting in a teepee built right on the tracks / Rolling them bones until the foreman comes back / Pick up you belongings boys and scatter about / We’ve got an off-schedule train comin’ two miles out.”. I mean, Jesus Christ! You can see it! Tremendous!