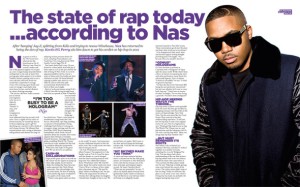 Nas greets us with a fist. We’ve just been ushered into the boardroom at the St Martins Lane Hotel in central London and one of the greatest rappers ever to pick up a mic in anger bumps knuckles before settling back to the task at hand. He’s tearing apart what appears to be a whole Nando’s chicken, pausing only to run a corn-cob back and forth across his mouth like a typewriter’s carriage return. He’s wearing a grey hoody and a pair of vintage Cazal shades that never leave his face, and he’s flanked by a heavy-looking entourage.

The 38-year-old New Yorker remains just as intense and enigmatic as he was aged 20 when he released ‘Illmatic’ in 1994, now widely recognised as one of the most influential hip-hop records of all time. Over ten tightly-woven tracks of literate lyricism he turned hip-hop on its head, displaying a poet’s gift for sketching out a narrative with a fistful of well chosen rhymes. He followed that seminal release with a string of platinum-selling albums and showed his range by adopting a string of personas down the years like ‘Nastradamus’ and ‘God’s Son’. He even ghost-wrote Will Smith’s ‘Gettin’ Jiggy Wit It’.

Despite his talent shining through from a young age, Nas hasn’t always had it easy. He was locked in a bitter public feud with Jay-Z from 1996 to 2005 as the two great rappers vied for the title of ‘King of New York’. In 2006 he appeared publicly with his rival at a series of shows and they finally put their differences to bed. He found himself arguing in public once more in 2009 when he and ex-wife Kelis split acrimoniously shortly before the birth of their son, Knight.

Back in ’94 he got famous saying: ‘Life’s A Bitch’, but after living through more beef than an episode of ‘Man Vs Food’ he’s returned with a new record optimistically titled ‘Life Is Good’. It’s not just his outlook that’s changed: the hip-hop landscape has shifted too. There’s a new breed of troublesome young turks like Odd Future setting their sights on offending everyone all the time, while in contrast A$AP Rocky has taken a stand as a voice against rap’s homophobia. Meanwhile Jay-Z and Kanye’s all-conquering, globe-straddling ‘Watch The Throne’ tour has set a new standard for hip-hop as a stadium-filling live proposition. Having been there in the crucible of New York from the very beginning, Nas is ideally placed to pass judgement. To get a real sense of the state of hip-hop in 2012, we sat down for an audience with the Don.

Collaborations should mean something: like Nas and Amy Winehouse

High-profile guest-spots on each other’s records are the easiest way for rappers to pump up their radio airplay, but it’s hard to shake the feeling that these have just made superstars like Nicki Minaj increasingly mercenary. Nas acknowledges that for some artists, the lure of working with another big name overshadows the quality of the music itself. “There’s some great talent out there in the world, and sometimes we just collaborate because we like the other artist. That’s cool, but it really works out when there’s time put into it.”

On ‘Life Is Good’ he duets with Amy Winehouse thanks to a vocal salvaged from her final recording sessions with long-time Nas collaborator Salaam Remi. Winehouse wrote ‘Me and Mr Jones’ about Nas and it’s clear that for him new track ‘Cherry Wine’ is both a labour of love and that song’s spiritual successor. “‘Me and Mr Jones’ means everything to me. I love that record. When she sings about the father of Destiny she’s talking about my daughter. I thought that was a clever line. I should have thought of that to say! We partied here in London. She’d come to my show and we’d hang out backstage and just talk. I feel like she was trapped in London.”

“My rhymes make you think”

As more and more anodyne hip-hop music is churned out for the club-going masses, it’s testament to Nas’s dedication to his craft that he remains one of the most articulate and eloquent rappers around. He hasn’t “dumbed down”. “That’s just my personality,” he says. “I talk to my friends about everyone from Charles Taylor in Liberia to Trayvon Martin to Paul McCartney. Those conversations go all over the place and that’s what winds up in my rhymes.”

Is he disappointed there aren’t more mainstream rappers writing thought-provoking lyrics? He laughs: “No, because then you wouldn’t need me!”

Dr Dre’s decision to perform at Coachella with a “hologram” of Tupac split the music world. While there’s been a flurry of interest in repeating the trick with other performers, many think this will tarnish the legacy of the greats. Nas, however, is very much in favour. “I think it’s incredible. I didn’t see it live but I think it’s good for hip-hop music. It was amazing.”

He likes the idea of the Notorious B.I.G. being the next performer ‘resurrected’ with the technology, but isn’t sure whether he’d want to come back that way after he’s gone: “I don’t have an answer for that! I’m too busy living a good life. You don’t need a hologram, I’m here!”

Hip-hop as it is today is almost unrecognizable from the scene Nas first got involved in, swapping mixtapes with local DJs on the streets of Queensbridge, New York. Now, Nas has seen peers like Jay-Z and Kanye West team-up to become stadium-filling superstars. He likes what he sees. “I still have love for hip-hop in some of its original forms, but it’s a big business, a big industry now. Thank God hip-hop became so big. The ‘Watch The Throne’ tour is a real hip-hop tour and the hologram with Dr Dre was a real hip-hop show. Those two things kept hip-hop number one.”

But it should also remember its roots

Nas’s father is the jazz musician Olu Dara and they’ve worked together on a number of tracks including the 2004 hit ‘Bridging The Gap’. Nas has always had a deep understanding of the way that modern hip-hop relates both to its own history and the music that came before it. “You can hear the blues player inside of me. Hip-hop music is finally getting some years behind the careers of the artists. For whatever reason the earlier artists didn’t seem to last too long in this crazy business. Today it’s different. My plan is to do music every time I feel it. Doing that has made me probably the longest-lasting hip-hop artist.”

“Homophobia is not hip-hop’s concern”

There’s an ongoing debate about homophobia in rap, most recently sparked by the deliberately provocative and offensive lyrics spouted by Odd Future’s Tyler, the Creator. In contrast, fellow young upstart A$AP Rocky recently told NME that he respects gay men and women. Nas, however, dismisses the idea that sexuality is a major issue. “Do I think rap music is homophobic? I don’t think that’s the concern of rap music at the moment. Rap is the street, rap is sex and money. They don’t have time to think about homophobia or anything like that. It’s about ass, ass, ass – female ass! It’s about women, money, it’s about being the flyest of the fly- that’s hip-hop.”

On ‘Back When’, from his new record, Nas points out that some rappers use offending others due to their sexuality or race as a mask for their own weaknesses: “I say: “You seem to blame all your shortcomings on sex and race, the Mafia, homosexuals and all the Jews. You might as well blame all your shortcomings on your foes the Jews, it’s hogwash point of views, stereotypical, anti-Semitic like the foul words Gibson spewed.” That’s Mel Gibson. That’s me just saying to let go of the illusions of someone holding you back.”

Nas wants to be known as the man with “the best album covers in rap”, and for new record ‘Life Is Good’ he’s taken the tabloid-baiting decision to pose with ex-wife Kelis’ wedding dress slung over his knee. “People have heard about my divorce. I’ve always had a private life but if people today want to get on the internet and talk then it’ll happen. For me, the cover was very therapeutic. I’m a storyteller, and it has that old bluesman vibe to it. I have so much to say on this record about myself personally. It feels like a record close to my soul. That’s the blues. My record cover: that’s the blues.”

He’s fiercely proud of the influence his ‘Illmatic’ artwork has had: “Think about how many album covers since then have been like that: Notorious B.I.G. and U2 all the way to Lil’ Wayne and Jill Scott. It changed the game.”

Regrets? I’ve had a feud

Rivalries like Tupac vs. Notorious B.I.G. have long been a feature of the hip-hop world, and Nas had his own ongoing feud with Jay-Z. With previously unseen footage from 2002 of Nas’s preparations for an inflammatory attack on Jay-Z recently surfacing, does Nas look back on his career with any regrets?

Not even about the time he commissioned a animatronic dummy of Jay-Z and a set of gallows so he could ‘hang’ him onstage?

Nas clamps the toothpick he’s been fiddling with between his teeth and shakes his head slowly to dismiss the question. Since the footage has come out he’s repeatedly refused to discuss or even acknowledge it. From a corner of the room a low voice mutters: “That’s not okay, man.”

Nas’s expression doesn’t flicker, but before we’re escorted out we try to defuse the situation by telling him that the new record is up there with his very best. He pauses and then his face cracks into a smile as the tension dissolves and we bump fists again. “Life is good, man,” he shrugs, “Life is good.”