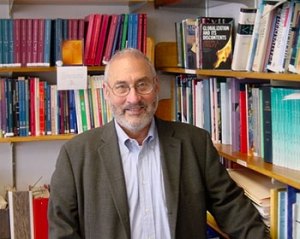 For a man who has just uncovered the simply vast amounts of money his country is squandering on a war he describes as “stupid”, Joe Stiglitz is surprisingly jovial. He is quick to laugh and engages with a wide smile, and doesn’t strike you as either a bookish Nobel laureate or as the “green eye-shaded accountant” that the Bush administration attempted to dismiss him as.

Bush now has another reason to dismiss Stiglitz, following the publication of ‘The $3 Trillion War’; named for the true cost he believes America will pay for its decision to invade Iraq. Standing on the brink of that day’s fifth anniversary now is the time to assess what Stiglitz points out is “the second longest war in America’s history, after the Vietnam War, and the second most costly, after World War II.”

Stiglitz provides many examples of what could be bought for a fraction of the price of the Iraq War – the USA’s spending on autism research equates to four hours in Iraq, ten days fighting costs $5billion, which amounts to total American aid to Africa each year, and one sixth of an Iraq War would pay the United States’ social security needs for the next half-century.

Of course, despite its cost, World War II was famously credited with lifting America out of the great depression, and has helped to promulgate the cliché that war is good for the economy – a misconception that Stiglitz aims to correct. “Wars use resources that could have been used to promote economic growth, and the fact is that since Keynes we know how to stimulate the economy in more constructive ways. This war has been particularly bad for the economy because of the impact that it’s had on the price of oil (oil prices per barrel have risen from $25 before the war to $100), and because it was totally deficit financed. Even as we went to the war we had large deficits, but then the Bush administration actually lowered taxes for the rich. The symptoms didn’t show up because they were hidden by lax regulation which flooded the economy with liquidity which was buoying the economy as these other factors were depressing it. We were in effect living on borrowed money and borrowed time, and a day of reckoning had to come, and it’s now come.”

Stiglitz believes that the actions of the regulatory authorities have had a direct impact on the current financial crisis. “The monetary authorities thought they had to do what they needed to do to keep the American economy going. The high oil prices and the war was having an adverse effect on the economy, and they simply did what they thought was right, but in a very myopic, short-sighted way – and it worked, in a very myopic, short-sighted way. The symptoms of what the war was doing, of what the high oil prices were doing, were not evident. They now have become evident. But the problem is, by postponing the cost we have increased the cost. The cost the economy is going to have to pay, not only the American economy but the global economy, will be a multiple of what it otherwise would have been.”

There can be no doubting Stiglitz’s determination to keep the issue of the war at the forefront of political debate at this crucial time for American politics. As far as he is concerned, it is the biggest issue there is. “My work focuses on the economics of the public sector, and you might say that the Iraq War is the single largest public project that the United States has undertaken. Typically when we begin a project like building a bridge, we do a cost-benefit analysis. We certainly don’t undertake a large project without looking at the cost. This was a war of choice. But we began the war without thinking about the cost.”

For Stiglitz, however, there is more than just the financial cost to consider. There is also the cost to the idea of democracy. “This was a war that, in part, was allegedly to spread democracy. Democracy means that citizens ought to be able to participate in decisions, and meaningful participation means that they have to know the consequences, and among the consequences are the costs. It seemed to me that if we are going to be talking about democracy then it was important for the American citizens to know what this particular project was costing. The Bush administration did everything it could to hide the costs from the American people. I’m testifying in congress on Thursday, and one of the points I’m going to make is that we should not have had to write this book, and if we did have to write the book it should have been a lot easier.”

Stiglitz explains how the Freedom of Information act was required to uncover even rudimentary information about the number of people injured in the war. In the course of the investigation he also turned up more alarming discoveries, such as the fact that the military were denied a request for MRAPs (Mine-resistant ambush-protected armoured vehicles) which Stiglitz argued would have saved a large fraction of lives, at a short term cost which will now be far outweighed by caring for the injured.

With a war this badly managed, it seems to me that those in charge must be either highly incompetent or highly corrupt, I ask Stiglitz which he sees. “There are elements of both. The Bush administration deliberately tried to obscure what these costs were and has continued to try to obscure it. Particularly the way the money has been appropriated in 24 separate bills, including emergency appropriations five years after the war started. When you go to war it’s an emergency, but five years later you should be able to plan. The way they have deliberately hidden information clearly shows an intent for people not to know. But there’s also an element of what you might call self-deception. The bureaucracy has been created to have a whole set of checks and balances, because you realise that people like to please their superiors. The Bush administration short-circuited many of these checks and balances, and the predictable consequence is that the quality of information was lower than it otherwise would have been. Then they said “How could we have known?” So they were responsible in part for the low quality of information, and many of the specific things they did predictably raised costs. For example, the behaviour of the contractors that were hiring people from Nepal and the Philippines rather than hiring Iraqis, fed the unemployment, while the failure to safeguard the weapons caches, meant that you had an explosive mixture: unemployed young men with weapons, and that explosive combination exploded. Now that was predictable.”

He points out the $19.3 Billion that Halliburton have received in contested contracts in Iraq, and describes current defence spending as “corporate welfare.” He bluntly observes “weapons don’t work against enemies who don’t exist.”

Looking to the future, it is hard to resist wondering how Stiglitz views the upcoming presidential elections. He is blunt about the differences between the candidates. “What is clear is that McCain’s policy, saying that we may be there for 100 years, is not the right policy. If you extrapolate what 100 years would cost, it’s huge. If you ask what the benefits are, it’s hard to ascertain. Obama has been quite forthright in saying he’s not against wars in general, but he is against stupid wars. And this was a stupid war. He was aware of the kind of divisions that existed, and therefore the difficulty of obtaining a sound outcome to the war, and he’s called for a quick withdrawal. I think that those are all policies that are consistent with prudent actions.”

How does he rate the chances of seeing Obama in the White House? At this question he smiles and nods, a look of real excitement in his eyes. And would this mean a return for the man who spent three years as chair of President Clinton’s Council of Economic Advisors? “Perhaps”, he laughs, but maybe a different job this time. At least Obama has already expressed a desire to have Stiglitz as an advisor. The current administration’s response to Stiglitz’s appearance before Congress was derisory. “People like Joe Stiglitz lack the courage to consider the cost of doing nothing and the cost of failure. One can’t even begin to put a price tag on the cost to this nation of the attacks of 9/11,” said White House spokesman Tony Fratto. “It is also an investment in the future safety and security of Americans and our vital national interests. $3 trillion? What price does Joe Stiglitz put on attacks on the homeland that have already been prevented? Or doesn’t his slide rule work that way?”

Whoever wins in November, the world should listen to Stiglitz. Whether or not Joe can catch the ear of the next administration could have a serious effect on the cost the globe is forced to pay for Bush’s most spectacular folly.

Originally published in the LSE’s The Beaver, 4 March 2008.