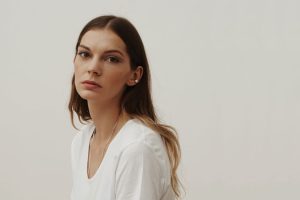 Sometimes you have to unlearn the rules. While growing up near Totnes in Devon, Rosie Lowe started learning piano and violin at the age of five. Later she picked up guitar as well, and did her musical apprenticeship in a jazz band. Yet it was only when she cast her instruments aside that she started writing from the heart.

“After I moved up to study at Goldsmiths I abandoned the piano and the guitar,” she remembers. “I got a computer with some Logic software and just started recording everything with my voice. I sang what was going on in my head: the drums, the bass and everything. It was the first time I was creating something that felt really ‘me’.”

Just like her music, her lyrics too come straight from her subconscious. Perhaps that’s why she can deal with topics as weighty as feminism and therapy with such a light touch. “I never know what I’m about to write about until I’ve written it,” she says. “I can’t really remember writing my songs. When it’s something I’m really feeling, I write it quickly – usually just over a couple of hours. When I’m on a vibe, I’m on it.”

Her debut record, ‘Control’, is full of these heartfelt moments, but she has no worries about letting people into her world. “This record is so personal to me, and I’ve lived with the music for so long,” she says. “I don’t want it to just be mine anymore, I want it to be other people’s too.”