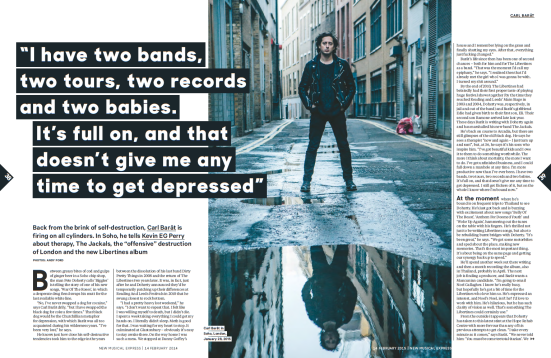 Between greasy bites of cod and gulps of ginger beer in a Soho chip shop, the man Pete Doherty calls ‘Biggles’ is telling the story of one of his new songs, ‘War Of The Roses’, in which a desperate drug fiend swaps his mutt for the last available white line.

“No, I’ve never swapped a dog for cocaine,” says Carl Barât drily, “but I have swapped the black dog for coke a few times.” That black dog would be the Churchillian metaphor for depression, with which Barât was all too acquainted during his wilderness years. “I’ve been very lost,” he says.

He knows just how close his self-destructive tendencies took him to the edge in the years between the dissolution of his last band Dirty Pretty Things and the return of The Libertines. It was in fact just after he and Doherty announced they’d be temporarily patching up their differences at Reading and Leeds in 2010 that he swung closest to rock bottom. “I had a pretty heavy lost weekend,” he says. “I don’t want to repeat that. I felt like I was willing myself to death, but I didn’t die. I spent a week taking everything I could get my hands on. I literally didn’t sleep. Meth is good for that. I was waiting for my heart to stop. It culminated at Glastonbury – obviously it’s easy to stay awake there. On the way home I was such a mess. We stopped at Danny Goffey’s house and I remember lying on the grass and finally shutting my eyes. After that, everything just fucking changed.”

Barât’s life since then has been one of second chances – both for him and for The Libertines as a band. “That was the moment I’d call my epiphany,” he says. “I realised then that I’d already met the girl who I was gonna be with. I turned my shit around.”

By the end of 2010, The Libertines had belatedly had their first proper taste of playing huge festival shows together and Barât’s girlfriend Edie Langley had given birth to their first son, Eli. Their second son Ramone followed late last year. These days Barât is writing with Doherty again and has marshalled his own new band The Jackals. He’s back on course to Arcadia.

There are still glimpses of the old black dog. He tells me he sees a therapist “now and again. I just turn up and rant,” but, at 36, he says it’s his sons who inspire him. “I’ve got beautiful kids and I owe it to them to do something worthwhile,” he says. “The more I think about mortality, the more I want to do. I’ve got unfinished business, and I could fall down a manhole at any time. I’m more productive now than I’ve ever been. I have two bands, two tours, two records and two babies. It’s full on, and that doesn’t give me any time to get depressed. I still get flickers of it, but on the whole I know where I’m bound now.”

At the moment where he’s bound is frequent trips to Thailand to see Doherty. He just got back and he buzzes with excitement about new songs ‘Belly Of The Beast’, ‘Anthem For Doomed Youth’ and ‘Woke Up Again’, hammering out the tunes on the table with his fingers. He’s thrilled not just to be writing Libertines songs again but also to be rebuilding burnt bridges with Doherty. “It’s been great,” he says. “We got some motorbikes and sped about the place, making new memories. That’s the most important thing. It’s about being on the same page and getting our synergy back up to speed.”

He’ll spend another week out there writing and then a month recording the album, probably in April. The next job is finding a producer, and Barât wants a Mancunian candidate: “I’m going to email Noel Gallagher. I know he’s really busy, but hopefully he’s got a bit of time for The Libertines who love him so. He’s expressed an interest, and Noel’s Noel isn’t he? I’d love to work with him. He’s hilarious, but he has such clarity of vision as well. That’s something The Libertines could certainly use. We’d defer to his brilliance.”

From the outside it appears that Doherty has taken to this latest stint at the Hope Rehab Centre with more fervour than any of his previous attempts to get clean. “I just take every minute as it comes,” says Barât. “We never told him: ‘You must become teetotalitarian’. We said: ‘We’ll take you as you are’. He’s happy and wholesome, as good as ever before.”

The band have just announced their first major festival headline slot of the summer, at T In The Park in July. They should have plenty of new material to perform by then, but questions remain: will Doherty need a minder on tour to keep him out of trouble? Will they have to tour dry? “I don’t think so,” shrugs Barât. “We’ll work it out. I’ll do whatever he wants, whether that’s boozing or not boozing. Well… obviously not heroin.”

It comes back to that idea of second chances. For Barât that means the opportunity to deliver on the promise they once looked like frittering away. “We’ve both had plenty of lost time,” he says, by way of understatement. “Now we want to make beautiful things that we’re proud of and that stand the test of time. I hope we can do that. To us, we already have. Our old songs stand up as much as they did when we first put them down. If we’ve got that in us, why rob ourselves of it, let alone anyone else?”

Before his Libertine summer there’s the small matter of ‘Let It Reign’, his first record with new band The Jackals. It’s scrappier, heavier music than Barât aficionados will be used to – a chance for the old romantic to channel his anger and vitriol into song. He’s tells me he’s been inspired by the apathy he sees around him to kick against the pricks. Especially those responsible for transforming his beloved London into an oligarch’s playground.

“I’m disgusted,” he says. “To me, it’s like seeing a museum smashed up and turned into a McDonalds. It offends my deepest sensibilities. We’re losing Buffalo Bar and Madame JoJos. I’ll do my bit where possible. Hopefully we’ll get a gig down the 12 Bar.”

He calls the approaching General Election “pigs in a sty jostling for food”. He’s a supporter of Russell Brand’s critique of the status quo, and could “acquiesce” to vote Green for lack of a better option. There’s a dystopian mood to the record, which Barât says draws on Evelyn Waugh, Terry Gilliam’s ‘Brazil’ and Orwell’s ‘1984’. He points over my head to where a flashing blue police light outside is illuminating the chip shop tiles. “I think Big Brother is getting closer and closer. The march of the neo-puritans is upon us.”

The video for lead single ‘Glory Days’ is dedicated to the 306 soldiers who were shot at dawn during World War I for “cowardice” or “desertion”. Theirs is a plight that Barât is genuinely moved by: “If I pull you out of your house from your family, put you in a bull ring and tell you to fight a bull, and you don’t, so then I shoot you, that’s murder. That’s state-sanctioned fucking murder.”

Barât can trace these questions about glory and patriotism right back to his childhood. He was raised by separated parents: a father who worked in an armaments factory, and a mother who was a member of the Campaign for Nuclear Disarmament and lived in Teepee Valley, a tented hippy commune in south Wales.

“That’s my life all over: schizophrenic,” nods Barât when I mention his unusual upbringing. “It was like parallel lives. A council estate with Victorian strictness on one side, and hippy-dippy lostness on the other side.”

Despite the powerful sense of British identity that runs through the record, Barât actually recorded it in Los Angeles during a series of margarita-fuelled sessions with The Bronx guitarist Joby J. Ford. The bulk of the record was laid down there, featuring the likes of Killers’ violinist Ray Suen and Beastie Boys percussionist Fredo Ortiz. Then they came back to London, where he brought in his newly-auditioned Jackals bandmates to finish it.

After our fish supper we wheel away through a cold night in Soho to Wardour Street to find them. Barât maintains an office here, a war room of sorts. There are Union Jacks on the walls and a finely detailed map of France. “I apologise,” he says, “for the fact it looks like a National Front headquarters.”

Barât introduces me to guitarist Billy Tessio, drummer Jay Bone and bassist Adam Claxton, none of whom should be mistaken for mere yes men. “As much as I respect Carl as a fellow musician, and adore his past work, I don’t want to put him on a pedestal,” says Tessio. “There’s four of us in this band now, let’s see what we can do.”

They shrug off the idea that the Libertines reunion puts them in an awkward position. “I’m as excited about a new Libertines album as anybody else,” says Bone. “This band is an outlet for some of the things Carl wants to do that don’t fit The Libertines. We’re heavier, with grunge influences and louder guitars.”

“What’s good about Carl,” adds Claxton, “Is he treats this project with as much respect as he treats that project. He’s as hungry and thirsty for it as we are.”

That much is clear. Barât has that Libertine glint in his eye once more, and The Jackals have helped chase the black dog from the door. Earlier, he’d told me another Churchill line worth remembering in times of darkness: “If you’re going through hell, keep going.”