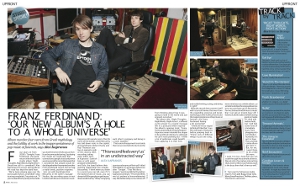 Four years on from 2009’s ‘Tonight:’, Franz Ferdinand return with their fourth studio album ‘Right Thoughts, Right Words, Right Action’. Should we call it a comeback? Alex Kapranos isn’t so sure. He says life on the road has kept the band lean.

“We’ve been playing gigs over the last couple of years, so we didn’t stop touring completely,” he points out. “If you’re a band that’s purely in the studio you lose the sense of who you are live. It can become quite boring. So playing live meant we could keep that connection to people. It was only when we announced the record last week that I considered that people would be deciding whether they wanted another Franz Ferdinand record, but we had a really lovely, positive response. ”

He’s sat with bandmate Nick McCarthy in the latter’s Sausage Studios, the recording space in East London with the wurst name in music. Kapranos still spends most of his life north of the border while McCarthy has lain down roots in the capital, and bandmates Robert Hardy and Paul Thomson also live at opposite ends of the country. With recording taking place either here, at Kaprano’s Scottish base or with guest producers in Stockholm and Oslo, the band believe their working relationship has actually blossomed. “I think when you listen to a record you can tell, even if it’s the darkest kind of music, you can always tell if the people are getting on,” observes McCarthy. “If they’re enjoying each other’s company and being in a room together.”

That sense of enjoyment is certainly there on a record which returns to the jaunty exuberance of their self-titled 2004 debut. It’s a change of direction after ‘Tonight:’ “That felt like a tangent,” points out McCarthy, before Kapranos continues: “This record feels very ‘us’, and very ‘us’ in an undistracted way. We deliberately cut ourselves off from thinking about how it was going to land in the world and just enjoyed ourselves.”

The album title, ‘Right Thoughts, Right Words, Right Action’, is offered as the answer to a cryptic message left in a postcard which inspired the album’s opening track: “Come home, practically all, is nearly forgiven”. Kapranos never intended the slogan as a political rallying cry, although he can’t resist pointing out: “I think a lot of politicians could benefit from applying it to their lives and really thinking, acting, and doing it right!”

What the record does concern itself with is lyrical themes that veer from the expanding universe and Greek mythology to the futility of work and the inappropriateness of pop music at funerals. Are Franz Ferdinand feeling existential?

“I think we’re too stupid to think of it like that,” says Alex with a grin. He pauses before jumping back in: “There’s lots of different things in just one song, never mind across a whole album, so sometimes it does the songs a disservice to try to sum them up in a few words. For me, the best kind of music is music that I can get an instant buzz off, I listen to it and it makes me feel fucking good, or maybe it’s dark and melancholic but I still feel some kind of immediate buzz from plugging into somebody’s humanity. It’s got to have that, and that can be all you get from it. But for me, I want there to be a little bit more. I want it to be a hole that you can crawl through into a whole universe. We put a lot of ourselves into putting that universe there, but if all you want is the little buzz then that’s there as well.”