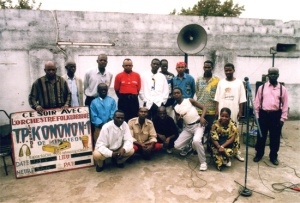 Anyone who has spent time in Kinshasa, the capital of the Democratic Republic of Congo, will know that it’s a city that bustles with an industrious and infectious energy. Maybe it was living there that inspired Mawangu Mingiedi to take that energy and apply it like jump leads to the Bazombo trance music he had grown up with near the Angolan border. In doing so, he created a band called Konono No.1 and revolutionised a musical tradition that stretched back hundreds of years.

The impact Konono No.1 have had on Bazombo music has been literally electrifying. When Mingiedi found himself unable to find the sound he was looking for using traditional instruments he took it upon himself to build the first ever electric likembe. The likembe is a kind of handheld piano played with the thumbs, but amplification using magnets salvaged from old cars transformed it. When the band plays the likembe on stage it looks like they’re operating oversized remote controls. It sounds like nothing you’ve ever heard before.

Continue reading at The Quietus.

Can I tell you my Bill Murray story? A decade ago, I got a job working as a copywriter for a whisky company at the Cannes Film Festival. Our office was just off the lobby of the star-packed Hotel Martinez, and to celebrate opening night the hotel had given us a bottle of champagne. The very moment we popped the cork, as if summoned by the sound, Murray materialised in the room and asked: “Are we drinking?” Before we knew it, he was the one filling our glasses and regaling us with his plans to “cause mischief” at the festival. Our bosses at the whisky company were livid, of course. We’d somehow made Bill Murray appear in our office and all he’d drunk was champagne.
This photo of Jack Kerouac, David Amram and Allen Ginsberg was taken in 1959 during the "stoned-out, crazy party" that was the making of 'Pull My Daisy'. I spent a glorious couple of hours talking to Amram about what it was like being mates with Kerouac, who would have turned 100 this week. The best bits are in today's @the.independent
In 1973, Patrick Haggerty sat down to write a song about how pissed off he was with straight men. “Cryin’ These Cocksucking Tears” was released on his band’s eponymous debut 'Lavender Country', the first country album ever recorded by an openly gay artist. Haggerty thought the record had been completely forgotten about until that song resurfaced online. Now, almost 50 years on, he's releasing a second album. I was lucky enough to speak to him this week about his activism, his music and the wonderful advice he got from his dairy farmer dad, a "profound hick". In today's @the.independent
In November I went to New York to see my best mate Tom. After two years apart we celebrated by feasting: on @originalnathansfranks hot dogs on Coney Island, on proper New Yawk cheesecake at @kelloggsdiner, and most of all on the mammoth Porterhouse steak (for three! Ha!) at @keenssteakhouse. Cheers to @mandacanning for allowing me to immortalise our gluttony in the new issue of @goodplacemag, and special thanks to @mattdutile who was charged with the task of recreating our meals for the gorgeous pics. The pull quote on the second slide is what FDR said to the Queen Mum when she asked him how one should eat a hot dog: "Push it into your mouth and keep pushing it until it is all gone." Words to live by.