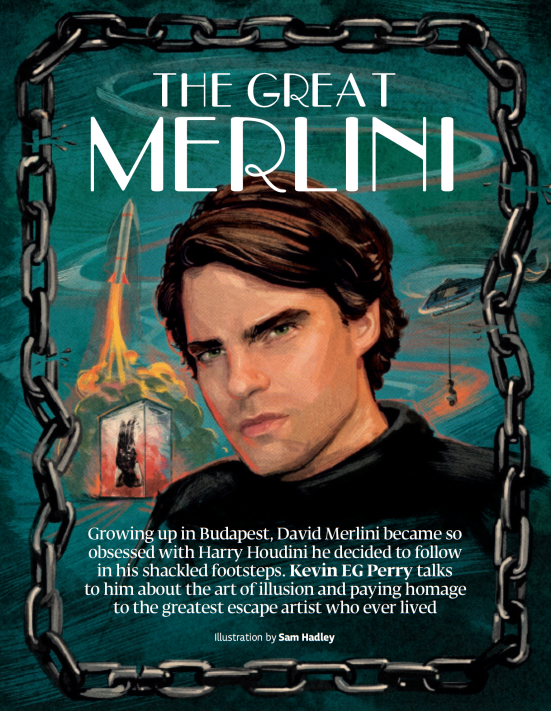 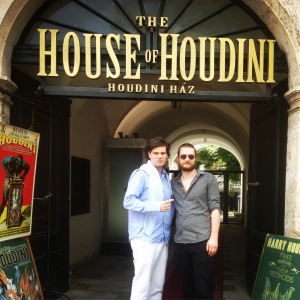 Early in his career, David Merlini learned that one of the benefits of being an escape artist is not having to worry when you’re stopped by the police. It was the mid-90s, and he had just bought his first car, a silver Maserati. Not bad for a 17-year-old in Budapest. There was just one minor problem: he didn’t have a driving licence. So he came up with a ruse. Whenever he got pulled over, he’d say that his license was in the boot. When they popped it open it would be full of chains and padlocks.

“What are you doing with all these?” they’d demand.

“Is that right? Could you escape from my handcuffs?”

They’d snap on their police-issue cuffs and moments later Merlini would hand the bracelets back to them. By this point, they’d have invariably forgotten all about needing to see his licence. As if by magic.

Yet there is no trickery in this story. They were real policeman with real handcuffs, and Merlini really wrestled free of them. Even Merlini’s name is real, and appears on the driving licence he’s rather belatedly acquired.

Teller, the shorter half of Penn & Teller, once told Esquire magazine that: “Sometimes magic is just someone spending more time on something than anyone else might reasonably expect.” Merlini knows that to be true. He has spent his whole life learning to escape.

Merlini was born in Budapest on 31 October 1978 to an Italian father and a Hungarian mother. They knew something was different about their son by the time he reached the age of four. He showed no interest in Matchbox cars, Lego or football. The only toys he wanted to play with were padlocks and handcuffs. His only passion was for magic. Not long after, his father moved the family to Turin in northern Italy. Coincidentally, the city is home to the biggest society of European magicians: The Circolo Amici della Magia di Torino. A chance meeting with one of its founders led to Merlini joining the club when he was just 13, after an examination period of six months. He was the youngest member ever admitted.

It was in their library of magic that Merlini made a discovery that changed his life. He began to read about the life of Harry Houdini, the greatest escape artist of all. Here was a man who had shared Merlini’s love for combining magic with padlocks and handcuffs. What’s more, both men had been born in Budapest – one district away from each other – but left Hungary as young children. Houdini had died at the age of 52 on 31 October 1926. Exactly 52 years later, Merlini had been born. “Then and there it was decided,” says Merlini. “I will stage again all of his illusions, all of his escapes, but with a modern key. I will modernise these amazing escapes that he performed.”

He didn’t waste any time. Merlini made his first public appearance at the age of 14, in the theatre tent of Budapest’s Sziget festival. Just two years later, he was upside down over the main stage at the same festival escaping from a straitjacket while suspended by his feet from a burning rope. It was a variation on a trick Houdini himself had performed outside newspaper offices to guarantee himself press coverage, and it had a similar effect for Merlini. “In 1995 in Hungary it was something that had never been seen before,” he remembers. “There was massive media attention, which fuelled my passion. I made a statement that every year I would present a new stunt, something amazing. The year after I was locked in a steel box and lowered into the Danube river.”

Quickly succeeding in his goal to recreate Houdini’s escapes, Merlini then raised the stakes even higher. “Escape artists all do the same gigs. They get chained, they escape,” he explains. “I always wanted to create something of my own.”

The first show he devised himself was performed in Budapest’s Hero’s Square in 2001. Merlini was strapped in a regulation straitjacket and then welded into a steel and reinforced glass container filled with water. The water was then frozen, and 33 hours later the one ton ice block was melted with chainsaws and flame-throwers. Merlini then staggered out and escaped from the straitjacket. After that, the stunts got bigger every year. One year he was embedded in a block of concrete and lowered into the Danube. The next he was launched inside the largest non-governmental non-military rocket every commissioned by an individual. “After I was launched in the rocket, I said: ‘What else can I do?’” he laughs.

His answer to that was to be named Best Escape Artist at the World Magic Awards in Los Angeles in 2007. He picked up the award after performing a variation on his ice block escape where he was instantly frozen with liquid nitrogen. Two years later, on the starting grid before a Formula 1 race in Bahrain, he broke the world record for the longest breath-hold underwater with a staggering time of 21 minutes and 29 seconds.

The trick with Merlini is that there is no trick. “A magician creates an illusion by, for example, using the dice to roll a certain number, and maybe the dice is prepped, and the trick is possible because of an apparatus,” he says. “On the other hand, the escape artist is the apparatus itself. The secret behind my escapes is how to hold your breath, how to open locks underwater, how to resist very uncomfortable and harsh conditions. It wouldn’t be right to say it’s trickery, because the trick is the man itself.”

Having performed all over the world, Merlini returned to Budapest to open The House of Houdini last year. An apartment in Buda Castle has been transformed into a shrine to Merlini’s hero. Handcuffs and lock-picks that once belonged to the great escape artist, as well as his old family bible inscribed with his birth name Erik Weisz, sit side by side with props from a recent Houdini television series starring Adrien Brody, for which Merlini taught him the basics of escapology. There are also regular magic shows, every half an hour, literally providing a stage for a new generation of young Hungarian illusionists.

Before it opened, there was nothing to mark Houdini in the city of his birth. Merlini couldn’t allow that to continue. “Houdini is still an icon,” he says. “The museum is here because I hope he will still be an icon in 100 years, because that’s what he deserves. He had the class and the straight-forward style all mixed in one. He was unique. We have amazing magicians again today who are very successful, but I doubt if in 100 years there will be many names still up for future generations.”

Merlini and Houdini capture the imagination because in escaping from the ties that bound them, they represent something essential in the human condition. The French philosopher Jean-Jacques Rousseau once wrote that: “Man is born free, but is everywhere in chains.” Houdini and those who’ve followed him show us that we can throw them off. “We all have our manacles and our chains,” says Merlini. “It’s just a question of how we can escape from them.”