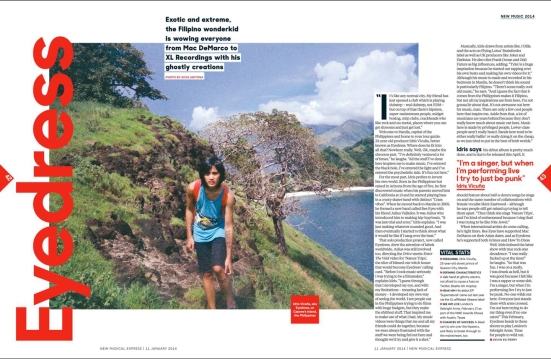 “It’s like any normal city. My friend has just opened a club which is playing dubstep – real dubstep, not EDM – but on top of that there’s hipsters, super mainstream people, midget boxing, strip clubs, crackheads who like rock and nu-metal, places where you can get shrooms and just get lost…”

Welcome to Manila, capital of the Philippines and home to your tour guide: 23-year-old producer Idris Vicuña, better known as Eyedress. Where does he fit into all that? Nowhere exactly. Well, okay, maybe the shrooms part. “I’ve definitely ventured a lot of times,” he laughs. “All the stuff I’ve done here inspires me to make music. I’ve entered the black hole, I’ve entered the light and I’ve entered the psychedelic side. It’s fun out here.”

For the most part, Idris prefers to invent his own world. Born in the Philippines but raised in Arizona from the age of 5, he first really discovered music when his parents moved him to California at 13 and he started playing bass in a crusty skater band with distinct “Crass vibes.” When he moved back to Manila, in 2005, he formed a new band called Bee Eyes with his friend Julius Valledor. It was Julius who introduced him to making hip-hop beats. “It was just trial and error,” Idris explains. “I was just making whatever sounded good. And then eventually I started to think what it would be like if I sang over the beat.”

That solo production project, now called Eyedress, drew the attention of labels worldwide. Julius was still involved too, directing the Drive-meets-Enter The Void video for ‘Nature Trips’, the slice of blessed-out witch house which would become Eyedress’ calling card. “Before I took music seriously, I was trying to be a filmmaker,” explains Idris. “I guess through that I developed my eye and with my limitations, meaning lack of money, I developed my own way of seeing the world. I see people out in the Philippines trying to do films with huge budgets but they make the shittiest stuff. That inspired me to make use of what I had. My music videos were things that me and all my friends could do together because we were always frustrated with the stuff we were being fed out here so we thought we’d try and give it a shot.”

Musically, Idris draws from artists like J Dilla and the acts on Flying Lotus’ Brainfeeder label as well as UK producers like Joker and Darkstar. He also cites Frank Ocean and Odd Future as being big influences, adding: “Tyler is a huge inspiration because he started out rapping over his own beats and making his own videos for it, so for me that inspired me.” Although his music is made and recorded out of his bedroom in Manila, he doesn’t think is sound is particularly Filipino. “There’s some really cool old music,” he says. “And I guess the fact that it comes from the Philippines makes it Filipino but all inspirations aren’t from here, I’m not gonna lie about that. It’s not awesome out here for music, man. There are only a few cool people here that inspire me. Aside from that, a lot of musicians are years behind because they don’t really know much about music out here. Music here is made by privileged people. Lower class people aren’t really heard. Bands here tend to be either really ballin’ or really doing it on the cheap, so we just tried to put the best of both worlds.”

He says his debut album is pretty much done, and is due to be released this April. It should feature about half-a-dozen songs he sings on with the same number of collaborations with female vocalist Skint Eastwood – although he says people still get mixed up trying to tell them apart. “They think she sings ‘Nature Trips’ and I’m kind of embarrassed because I sing that! I was trying to be like Nite Jewel.”

When international artists do come calling, he’s right there. Bee Eyes have supported Mac DeMarco at their Asian dates, and as Eyedress he’s supported both Grimes and How To Dress Well. The latter show which Idris’ enjoyed with true rock star decadence. “I was really fucked up at the time!” he laughs. “So that was fun. I was on a molly, I was drunk as hell, but it was good because I felt like I was a like a rapper or some shit. I’m a singer, but when I’m performing live I try to just be punk. No-one ‘wilds out’ here. Everyone just stands there with their arms crossed. I’m out here trying to do my thing even if no one cares!” This February, Eyedress heads to these shores to play an NME Awards Show at London’s Sebright Arms. Time for people to wild out.

“It’s really sad because the government doesn’t really do anything,” sighs 23-year-old Filipino songwriter and producer Idris Vicuña over a Skype connection from Manila, well north of the areas affected by the recent typhoon which ravaged the country. He shakes his Beatles mop top as he describes how his countries problems extended well beyond the recent catastrophe. “There’s a bigger problem out here than the typhoon. If you see the way our cities are built and look at our traffic, you’ll see that everything’s poorly planned. The only thing to do is to encourage everyone to work together and be loving towards each other.”

As Eyedress, he’s doing just that with his music. Born in the Philippines, Idris moved to the United States when he was five, living first in Arizona and then in California as a teenage, where he discovered music mainly through skate videos. After moving back to Manila in 2005, Idris continued to make music, both in indie band Bee Eyes and his own solo electronica project Eyedress. It’s with this blessed-out witch house that he caught the attention of Abeano, the indie label that broke the likes of Vampire Weekend and Iceage.

What proved really unforgettable is his homemade video for ‘Nature Trips’, blending lo-fi aesthetics with lashings of ultra-violence. “Before I took music seriously,” Idris explains, “I was trying to be a filmmaker. I had lots of limitations, particularly in terms of money, but I developed my own way of seeing the world. My music videos were things that me and all my friends could do together because we were always frustrated with the stuff we were being fed out here.”

His debut EP, out now, sees Idris teaming up with Skint Eastwood, who provides feminine vocals to counterpoint his own, although not everyone can always tell: “People get it mixed up,” Idris laughs. “They think she sings ‘Nature Trips’ and I’m kind of embarrassed because I sing that! I was trying to be like Nite Jewel.” He’s ended up sounding like nobody except himself. Keep your eyes on what Eyedress does next.