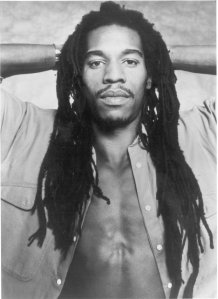 ‘If Tony Blair was in front of me, I’d fucking lamp him.’ Benjamin Zephaniah is back, and he’s angrier than ever. His new album ‘Naked’ is his first since ‘Belly of De Beast’ a decade ago, and he begins our interview by explaining that he never gets himself tied into a record or book deal, so you know that if he’s got material out then it’s because there’s something he needs to say, not because he’s fulfilling a contract. However, he tells me that there could be another record not too far away, simply because there’s so much going on in the world that he feels the need to speak out about. He may be best known as a poet, but his albums allow him to combine music with the performance poetry that comes naturally to someone who favours the oral tradition over dull textbooks. ‘Naked’ sees him at his very best, ‘undressed’ and ‘looking at the truth’.

Despite his righteous anger, I get the feeling that Benjamin Zephaniah is something of a reluctant radical. He’s as laid back and easy going as they come, and happily tells me that he’d much rather be ‘writing comedy and having lots of sex’. Unfortunately for the Tony Blairs of this world though, he’s the sort of person who couldn’t live with himself being apathetic.

On the title track of his new album he says ‘I hate dis government as much as I hated the one before it and I have reason to believe that I will hate the one to come’. It’s a powerfully delivered statement, but I ask him if he ever feels depressed about the lack of difference his message, and those of people like him, has made. ‘Yes, in a word. One of the most frustrating things is that there are no alternatives.’ He tells me about his experiences in South Africa after the fall of Apartheid, where he experienced the rare phenomenon of people actually being excited to vote for someone, rather than voting for the lesser of two evils. The end of Apartheid in South Africa was an issue that was close to Zephaniah’s heart. In the early 80s he recorded a protest song for Nelson Mandela with the Wailers, becoming the first artist to record with them after Bob Marley’s death. He tells me that the issue of South Africa brought them together, and the song was heard by Mandela, who asked to meet him when he was released from Robben Island. Zephaniah cannot help but remark at the way Mandela’s image has transformed in the West ‘You have to remember that at the time, the ANC were Al Qaeda, and Nelson Mandela was Osama Bin Laden, except that he’d been caught!’

Africa remains a central theme in Zephaniah’s writing. On ‘Rong Radio Station’ he says ‘I waz trying to convince myself that I could ease my conscience, If I gave a few pence or a few cents to a starving baby in Africa, Because African babies need me so, Because African babies needed my favours, Because Africa is full of dictators, and oh yeah, Globalisation will bring salvation. I’ve been listening to the rong radio station’ I tell him that while I agree that giving money to charity may not be the long term way to solve inequality, it must have an important role to play for the people suffering right now. Anyone who received the Kenyan Society’s recent urgent email regarding the drought that has hit the Horn of Africa will know that it has been estimated that eleven million people there will require food aid, but is the urge to give them our loose coins any more than middle class guilt? Zephaniah thinks that charitable giving is short changing African nations ‘If you have a stab wound, you don’t try and cover it up with a plaster do you? I’m not saying that people who give to charity are bad people, I’m saying that they should get political. Too often people give to charity and think that that counts as being political, because they’re scared of being revolutionary or radical.’ He compares the difference to that of not being a racist, and of being actively anti-racist. ‘If you’re walking down the street and you see a guy getting beaten up by a racist, do you walk on and say ‘That’s bad, I wouldn’t do that’ or do you actually get involved and do something to stop it? It may not be directly confronting the racist, but just anything to actively stop it happening. The same applies to charities. There’s more to stopping inequality than putting money in a tin.’

Issues of inequality are never far from Zephaniah’s mind, which is hardly surprising given his personal journey from spending time detained at Her Majesty’s Expense to being invited to the palace to meet HRH in person and collect his OBE, an ‘honour’ which he famously declined. He wrote at the time ‘Me? I thought, OBE me? Up yours, I thought. No way Mr Blair, no way Mrs Queen’ He rejected it on several grounds, not least the fact that an Order of the British Empire would be an unwieldy honour for someone who is ‘profoundly anti-empire’. Today he stands by his decision, describing those who accept one as ‘getting into bed with government and monarchy’ He says ‘I mean, I got a letter from Tony Blair inviting me to Downing Street. If Tony Blair was in front of me, I’d fucking lamp him. I’m a vegan, and when I was offered the OBE it was like someone who knew that offering me a steak, I’d fucking hit them, y’kno?’

He tells me that the years he spent in prison were formative for him. He says ‘Prison gave me time to think. Screws always have this thing where they’ll be like, ‘I’ll give you a year, you’ll be back’ When they said that to me, I said, ‘I’m not saying I won’t be back, but if I am it’ll be political.’ I realised that stealing off of the working class guy wasn’t achieving anything, but political activism could.’

Honours that he has been happy to receive are the honorary doctorates that have been bestowed on him by various Universities scattered across Britain. He counts ten proudly displayed on his wall, and tells me that for someone who left school at thirteen, being told your work is influential is an especially great honour, and one with some unexpected privileges. ‘After the first one I went to give a talk to some school kids and they introduced me as Dr Benjamin Zephaniah. I said, ‘Oh No, You don’t have to do that’ but the kids seemed impressed. I told them that I had had it put on my drivers licence so that every time I get stopped, the policeman has to call me ‘doctor.’

Freedom of speech has always been a key issue in Zephaniah’s writing, but he says that he thinks the recent uproar over cartoons published in a Danish paper highlights the ‘responsibility that comes with the right’ to free speech. Furthermore he tells me that he believes portraying the prophet as a suicide bomber perpetuated the negative stereotype that all suicide bombers are Muslim. He tells me that when he was in Palestine there was a suicide bomber who was a Christian, but ‘the media reported that he was a ‘Palestinian suicide bomber’, and never mentioned the fact that he was a Christian. It just fits in with this blinkered view that all suicide bombers must be Islamic.’

Musically speaking, ‘Naked’ is Zephaniah’s most diverse album. Every track stands out as an experiment in a different genre. He switches effortlessly from drum’n’bass to hip-hop and from garage to reggae dub. He tells me that whilst previous albums have been mostly reggae orientated, like ‘Belly of De Beast’ which was produced by the legendary Mad Professor, the new album ‘experiments with any genre of music that will enhance the words’. This openness to experiment has seen the involvement of a couple of talented collaborators. Preceding the release of the album is a remix EP by Rodney P, a friend of Zephaniah’s who ‘demanded’ that he got involved after he first played him the album. The album itself, unlike so many of the cheap and mundane CDs on the market, is physically a work of art. It is presented as a mini book of poetry, something Zephaniah says was intentional to ensure that the poems could stand alone from the music, and features the artwork of genius graffiti artist Banksy, whose work has become notorious worldwide and is ‘displayed’ everywhere from Palestine to LA and in several places close to the LSE campus. Zephaniah praises the alternative viewpoint that Banksy’s art provides. ‘He’s subversive and gives you another way of looking at the issues, which complements my poems.’

You sense that whilst he is very much a performance poet, he is at heart a wordsmith. I ask him how he sees himself. ‘I describe myself as a ‘Griot’. It’s a West African term which has no exact translation in English. Probably ‘Troubadour’ or ‘Bard’ would be closest. It’s someone who travels from village to village. Maybe they’ll tell a story in one village, sing in the next and perform a poem in another. Sometimes they aim just to entertain, but sometimes their aim is to get people off their asses and ready to storm the government.’ At a time like this, we need Griots like Benjamin Zephaniah more than ever.

Originally published in the LSE’s The Beaver, 7 March 2006.