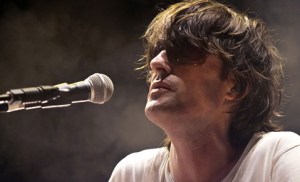 Like Bono, Jason Pierce is rarely seen onstage without sunglasses. Mercifully, that’s about as far as U2/Spiritualized comparisons go. Over seven albums spanning more than two decades, Pierce’s experiments with sound and pharmaceuticals have taken him from the platinum-selling highs of 1997’s Ladies And Gentlemen We Are Floating In Space to the gruelling lows of last year’s battle with a degenerative liver disease. Now fighting fit again, the 46-year-old meets GQ.com at Fergus Henderson’s restaurant St John in east London, wearing a baggy MC5 T-shirt, black jeans and, of course, a pair of reflective aviators. As we settle into a quiet corner, he removes his glasses to reveal glacial blue eyes and opens up about new album Sweet Heart Sweet Light, the treatment that saved his life and wanting to snuggle down with Iggy Pop…

GQ.com: Do you think people make too much of the drugs influence on your songwriting?
Jason Pierce: Yes. It’s funny, I read Keith Richards’autobiography and I don’t think it reads like someone doing drugs because the drugs he got were the finest in the world. When they weren’t available, he stopped. Very few people have that kind of safety net. It’s a different world. The other thing about drugs is that they’re everywhere. I know plumbers and window cleaners who do more drugs than anyone I know in the music industry. Sure, drugs can help with songwriting, but no more so than language or music. The most psychedelic record in the world is Buddy Holly’s “Slipping And Sliding”. It reminds me of taking LSD but the author couldn’t have been more removed from that world. When music tried to describe the inner workings of the mind it lost its way quite dreadfully. When the world was full of people who wanted to sound like the Rolling Stones and they were chewing acid, loads of great music came out, but when it became more introverted and tried to actually explain the trip it got awful. I met [One Flew Over The Cuckoo’s Nest author] Ken Kesey and we did shows with him and the Pranksters. He was really not very psychedelic. I knew him through Tom Wolfe’s book, The Electric Kool-Aid Acid Test, but when I met him he was hanging out with these “New Pranksters” who were into staring at crystals. It was just awful.

What’s the biggest misconception about Spiritualized?
I don’t know and I don’t really care! Reading your own press is dangerous. The good is usually better than the reality, and the bad is so bad.

What made you want to start writing music?
The records that I like the most are the ones where you’re the only audience. It’s just you and the record. Those records that seem to elevate you aren’t just foot-tapping pop music, they demand that you are listening and taking it in. I want to make records like that. We live in an age now where you can type “Neu” or “Patsy Cline” into a search engine and get the whole back catalogue: all the bootlegs and the live recordings and everything. That’s not the same as listening to the music or having that music become part of your life, where you only have to hear two notes and it takes you back to a certain time.

Which lyric are you proudest of writing?
I like a lot of them. They’ve all been laboured over. I quite like “Broken Heart” for its real, blatant simplicity. It’s not trying to be clever. Things like “Out Of Sight” and “I Think I’m In Love” have more obvious plays on words and language, but “Broken Heart” is so starkly simple.

Is the religious language you use just the language of rock’n’roll?
It comes from gospel, blues and even doo-wop. It’s a shortcut to explaining what you’re talking about. When I wrote “Walking With Jesus” people knew that I was dealing with issues of mortality and what it means to be human. You don’t have a conversation with Jesus about trivia.

Can you recommend a good book?
The last book I read was Knockemstiff by Donald Ray Pollock. It’s set in Ohio and it reminded me of Denis Johnson’s Jesus’ Son. It’s a book of shocking stories from the Midwest, but written with such an elegance that you can just appreciate it for that. Pollock is from the town of Knockemstiff himself – it’s a real place – and even though he’s writing about outcasts and retards, there’s still a sense that he’s one of those people. It’s an amazing book. I don’t read as much as I should but I think books have had an influence on me. “Ladies And Gentlemen We Are Floating In Space” is a quote from Sophie’s World  by Jostein Gaarder. It’s an introduction to philosophy but written like Alice In Wonderland.

What is it that attracts you to America?
Every part of it’s like a B-movie. Anywhere else on tour you’re just on motorways, but in America you’re in a movie. When you go to San Francisco, you already know your way around. I went to the book depository area in Dallas and it really is like a film set. You’ve seen it so many times that you could draw a picture of the layout. The thing about America is the whole country is like a juvenile: big, powerful and full of its own strength. The whole of its musical history is on record. That’s so rare.

What’s the best thing you can cook?
Cheese on toast is about the limit. It’s good cheese on toast though, just because I make it. Even cereal is better if you make it than if anyone else does. I think I’m at my happiest touring and there’s not much opportunity for cooking on the road. I went to Italy a few years ago and learned some of that style of cooking. It basically just involved chopping things really finely, which appealed to me in an OCD kind of way. I kind of got into that for a while, just smoking joints and chopping things up into miniscule bits.

What was your favourite record in your parent’s collection?
We didn’t have many records! We did have the Seekers who did “Morningtown Ride”, “Georgy Girl” and “The Carnival Is Over”. I don’t think they’re that far removed from Spiritualized, actually. We had Holst’s The Planets  suite as well. Maybe there’s something in that as well.

What’s your drink of choice?
I absolutely adore wine. Fortunately I can drink it again because my liver is properly cured. It’s amazing. Given how bad it was, I can’t believe it’s back to how it started. The treatment is incredible. In some cases it’s even cured cirrhosis, which used to be untreatable. It meant scarring beyond redemption, but even that now seems to be curable. Which is good news if you like drinking.

When were you last starstruck?
I get this sort of rictus smile whenever I meet anybody who’s a big part of my life. Iggy Pop probably the most. I grew up listening to Iggy and I’ve met him a few times now. Last time he gave me a hug and part of me just wanted to snuggle down forever. The other part of my head was saying: “Just hold on tight – don’t let go.” I didn’t sleep at all that night.

Are you a perfectionist?
No, because I’m not seeking the perfect sound. There isn’t a scale with all the great music at one end and all the bad music at the other end. The finest music in the world is so close to the most awful music. It might be a change of production, or a slightly different voice. You can hear it in adequate cover versions of songs that don’t have any magic. It might be a slight difference in the voice or just the placement of the snare drum. It’s such a fine line. Most of my job is just making sure that the needle is on the right side to satisfy me; that it’s always rock’n’roll and it has some kind of ragged glory that satisfies what I like about music. Things like “Freedom” and “Too Late” are a few slips away from being quite middle-of-the-road, or worse: white soul. I don’t have a bag of tricks. It just takes time to make sure that it’s all right.