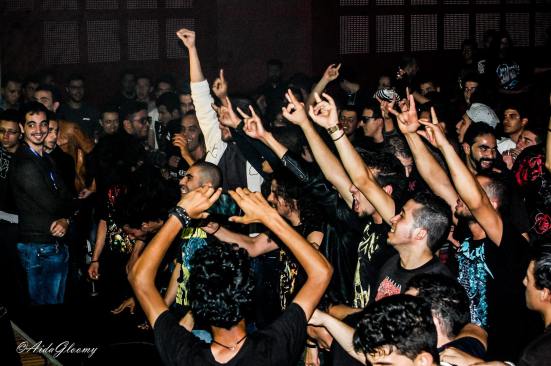 Being accused of worshipping Satan is bad enough when your sixth form art teacher takes exception to your Mayhem-inspired pentagram mural, but it’s rather more serious when the people pointing the finger are conservative Islamists with a national TV channel. That’s the position metal fans in Algeria found themselves in last August when they flipped on local network El Bilad to see an hour-long special casting those about to rock as enemies of the state.

“The media always paints a bad picture of us, showing Satanism and diabolic rituals,” says YoRi, singer and guitarist with Algerian progressive death metallers Predothia: “That can force the scene underground. This time, however, they chose not to go into hiding. Slogans like ‘Save Algerian metal’ and ‘I’m a metalhead and Muslim’ spread across Facebook, propelled by the popular Algerian Metal Community page, which boasts just under thirty thousand fans.

Turning their defiance up even louder, in November the north-eastern city of Constantine hosted 213Fest: Reach For A New Horizon, a two-day festival celebrating the best of Algerian metal. Organised as part of Constantine’s celebration of its status as Capital of Arab Culture 2015, it was perhaps the clearest sign yet that metal in Algeria is beginning to find some sort of mainstream acceptance.

The festival was organised by Harrag Melodica and Hichem Kikai, who help run the Algerian Metal Community page and originally met at a gig by the Tunisian band Myrath.

“The first edition of the festival went really well,” says Melodica. “Our aim was to put together a programme with excellent Algerian bands, and then to put on a production fit for head-banging. We received congratulations from all those present, and there were positive articles in the national press.”

Foued Moukid played the festival with his band Arkan. “It was great,” he says. “The organisation was very professional, and what about Algerian metal heads? They’re crazy! They don’t stop head-banging from the first note until the end of the show! Imagine you’re a metal fan but you don’t have the chance to attend concerts regularly. After months of frustration, you make sure you have a blast. That’s what a metal concert in Algeria looks like. Guys and girls who head-bang and enjoy the moment. During the festival we even got a wall of death!”

Moukid was born in Morocco before living and playing in Algeria in the 90s. Arkan are now based in Paris. “For me, the festival was particularly special because the last show I had played in Algeria was in 2003,” he says. “I’d been waiting to play there with Arkan for a long time. We knew that we have a lot of fans in Algeria, and they came from faraway to see us!”

The 90s metal scene in which Moukid and others cut their teeth was particularly significant in north Africa. At the tail end of 1991, around the time that on the other side of the world Metallica were releasing The Black Album and helping metal to a commercial peak, civil war was breaking out in Algeria. The ten years that followed, from December 1991 to February 2002, became known as the ‘black decade’, a period of terrorism and fratricidal war which claimed some 200,000 lives and displaced more than a million people. Yet somehow the chaos of war, and the lack of government interference, allowed the country’s burgeoning metal scene the space to grow. “In the 90s the government was focused on terrorism, and the Algerian metal scene prospered,” says Moukid. “Lots of bands played in the biggest cities of Algeria.”

“We also had a legacy of big brothers passing on tapes or vinyl of ands like Motorhead, Iron Maiden, Scorpions and Accept,” adds Melodica. “One day, young people began to buy instruments and put into practice what they’d heard. That’s how the first Algerian heavy metal bands were born, like Rascass, Neanderthalia and Litham.”

Litham, who formed in 1996, released their debut record ‘Dhal Ennar’ in 1999. It’s referred to as ‘the first metal album from Algeria’, and the band are still cited as a major influence by many of today’s emerging metal bands. Mustapha, drummer with melodic death metal band Traxxx, says: “The metal scene in Algeria started in the 90s with the legendary Litham. Sure, there were other bands but Litham were the most famous at this point in time.”

These days, many Algerian bands have become proponents of ‘Oriental’ or ‘Eastern’ metal, a sound which mixes heavy guitars with darbuka drums. Arkan’s Facebook page describes their sound as: “A concentrate of violence, twenty minutes of pure Death Metal mixed with Chahbi and other Eastern moods.”

That is, when they can find a place to play. While Traxxx were one of 213Fest’s success stories, Mustapha points out that outside of the festival it can be hard to find a venue. “The biggest problem for the scene is having a place to do it,” he says, “Because all the theatre and concert halls are handled by the government, and as you know the government don’t give a fuck about any underground movement, music or otherwise.”

The success of 213Fest suggests that Algeria’s metallers may at last shake off the Satan-worshipping tag given to them by a fear-mongering media. Melodica says the organisers steer clear of religion (“Faith is something very personal, we avoid mixtures.”) but his belief in metal is unbreakable. “The road to reach maturity is still long, but metal in Algeria is growing seriously,” he says. “A new generation of musicians like Acyl, Traxxx, Numidas, Fingerprint, Vomit Gore, Lelahell and Jugulator are getting their music out there on Facebook, Soundcloud and YouTube and I’m confident about the future artistically. It’s a very promising time.”