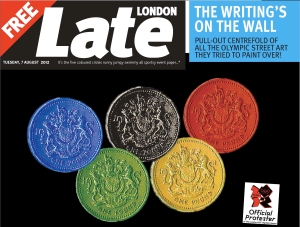 Adidas: “We’re not in the welfare business”

Official Olympics sponsor Adidas recently reported that they are unable to provide evidence that they pay their Indonesian workers any more than 34p an hour, and confirmed that in at least one supplier factory they are failing to pay even that amount. However, it would seem that chief executive Herbert Hainer has missed a memo. Speaking to the Independent while in London for the Olympics, he flat-out denied paying workers that rate, before adding: “We are not in the welfare business. Our job is to make a profit.”

Olympics Boss admits selling out to McDonalds and Coca-Cola

The president of the International Olympic Committee, Jacques Rogge, has admitted in an interview with the Financial Times that it “was not an easy decision” to allow McDonald’s and Coca-Cola to sponsor the Games until 2020. While he acknowledged that consuming their unhealthy products would not be a good step towards becoming an Olympian, he confessed that financial concerns won out. As the FT reported: “The growing financial demands of the Olympics were making it harder for the movement to hold on to its long-cherished values, which include taking care of one’s health.”

Dow Chemical Co. have announced that their 2012 second-quarter net income has fallen by 34 percent. Its share price also took a hit, falling 3.7 percent. The company are blaming weaker demand and the ongoing economic crisis, but they’ve have also been contending with one of the world’s worst ongoing PR failures: their handling of the Bhopal tragedy. In December 1984, a United Carbide India pesticide plant in central India began leaking poisonous gases and other toxic chemicals, eventually killing 20,000 people, poisoning 500,000 more and causing decades of disease. Union Carbide was bought by Dow Chemicals in 2000, but they have refused to assume any liability for the tragedy. The Indian Olympic Association have tried to pressure the London Olympic Games Committee to drop Dow as a sponsor as their stance clearly conflicts with the ethical standards of the Olympics.

Global mining giant Rio Tinto have the prestigious and lucrative job of providing all of the official Olympic medals at London 2012. However, they’re also guilty of human rights violations across the globe. At the end of last year, 780 unionised mine workers in Quebec were locked out for opposing plans to replace retiring workers with contractors who would earn 50% less in wages, with no pension and no union. Rio Tinto executives were also found guilty of bribery and stealing commercial secrets in China and sentenced to lengthy jail terms, while at the Kelian Gold Mine in Indonesia they’ve been accused of forcible evictions, contamination of local waterways and other human rights violations. Hardly medal-worthy behaviour.

Atos, the private company behind the controversial computerised test which judges whether benefit claimants are unable to work have drawn the ire of disability activists by sponsoring the London 2012 Paralympics. The company is paid £100m a year under a contract from the Department for Work and Pensions and tests around 11,000 incapacity benefit claimants every week. However, MPs and disability campaigners alike have highlighted their “flawed” approach which has already left thousands of genuinely disabled people unable to claim essential benefits. Tanni Grey-Thompson, who won 11 Paralympic gold medals as a wheelchair athlete, has said that disability benefit cuts will affect the development of top athletes while Tom Greatrex, Labour MP for Rutherglen and Hamilton West pointed out: “It is a cruel irony that the company causing so much distress to thousands of disabled people across the country is now sponsoring the Paralympics.”

London Late is a spoof newspaper that critiques and pokes fun at some of the more controversial sponsors of the Olympic Games, including BP, Adidas, Rio Tinto, G4S and Dow Chemicals.

The paper has been produced by five organisations – the London Mining Network, the anti-poverty charity War on Want, the Bhopal Medical Appeal, the oil campaign group Platform and the UK Tar Sands Network.

The paper was distributed today in central London, but if you missed out then you can download it in .pdf format or read it online below: