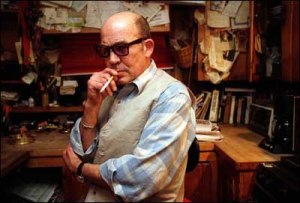 A lot can change in a year. Twelve months ago Pope John Paul II was still happily popeing around, part-time horse impersonator and full-time home wrecker Camilla Parker Bowles was preparing herself to marry into our glorious monarchy and I was living in a hut in the vast, desert-like stretch of land that surrounds the remote Indian town of Lucknow. The only means I had of keeping tabs on Prince Charlie’s equestrian pursuits or surveying the spread-betting on the date and time of JP’s demise was scalpeled from The Hindustan Times, a decent and upstanding publication with many fine English-language articles and an unintentionally hilarious section in which desperate parents seek spouses for their children. However, this is certainly not the time or place or page in which to discuss the merits or otherwise of arranged marriages, as it was on this date, exactly a year ago, that The Hindustan Times was to bring me news of the death of Dr. Hunter S. Thompson. He had, the Times informed me, put a gun into his own mouth and ended a life that had brought him literary notoriety as well as a reputation for personal excess, no holds barred journalism and fire-and-brimstone prose.

The front page of the paper carried the quotation “The best fiction is far more true than any kind of journalism” It was wrongly attributed to Thompson, the words in fact first being written by William Faulkner, but they were often cited by Thompson and influenced the genre of writing which he carved out alone. He called it ‘Gonzo’, a form of journalism where the writer not only brings their own experiences and opinions into the writing, but also becomes the protagonist. Hunter Thompson didn’t simply report the story, he was the story. 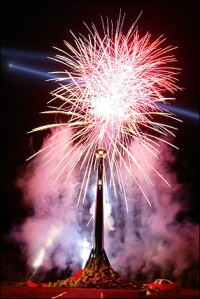 This is a man whose ashes, six months later, were loaded into huge flares and fired, along with enough fireworks to celebrate every Guy Fawke’s night for the rest of the decade, out of a cannon topping a 150-foot tower shaped like a fist with two thumbs and clutching a peyote button, an hallucinogenic cactus native to the south-west of the United States of America.

It’s an horrifically pathetic cliché to say something along the lines of “if you looked up crazy in the dictionary, his picture would be there” but his picture and biography actually appeared in text books about manic compulsives. He was a maverick, a dangerous lunatic and in my opinion at least, the best thing to happen to the written word since cavemen first took up pointy sticks and carved crude approximations of their grunts into the earth.

He first rose to infamy in 1966 when he established himself as a journalist who was not constrained by ordinary boundaries by riding with the Hell’s Angels in San Francisco, imbibing gallons of alcohol, guzzling prescription drugs and LSD and eventually getting his face pounded into the asphalt. Then writing a book about it. Whilst shocking and controversial at the time it was published, in contrast with his later work it is in fact remarkably conventional journalism.

The success of Hell’s Angels secured him work with a number of American magazines where he began to hone his trademark style. The most high profile of these was Rolling Stone, who serialised his most famous work, Fear and Loathing in Las Vegas in 1971. Starting life when Sports Illustrated gave him the chance to travel to Las Vegas to cover the Mint 400 motorcycle race, Thompson hit the road with Chicano lawyer Oscar Zeta Acosta and a veritable pharmacy of illegal narcotics alongside him in a huge red convertible. The “mean gibberish” he sent back transformed from race coverage into a “Savage Journey to the Heart of the American Dream” and was predictably refused out of hand by Sports Illustrated. Rolling Stone proved to be more accommodating and the book went on to critical and commercial success.

‘Fear and Loathing’, like all Thompson’s ‘Gonzo’ work, blurs the lines between fiction and journalism, but as Thompson himself said “only a goddam lunatic would write a thing like this and claim it was true.” As such, identities are always thinly but necessarily masked. Thompson becomes Raoul Duke, an alter ego he used on several occasions, often in the third person, and Acosta is referred to as Doctor Gonzo, or simply “my attorney”, and transformed from a Mexican into a 300-pound Samoan.

The book itself starts at a ferocious pace which never slackens. Like a drunk on a powerful motorbike, Thompson twists the throttle without let up, and as his passengers all we can do is cling on for dear life and hope that this unstoppable force manages to keep tyres to tarmac. Ostensibly about Thompson’s attempt to cover the race, and later the district attorney’s drug conference, the themes the book explores capture the zeitgeist of an era. It deals with the death of the dream of a non-violent revolution, which the sixties had seemed to promise, and sees the American Dream itself being killed off by war in Vietnam and the election of the crooked Richard Nixon. However, the book is much more than a period piece, it is a book about the human condition, in particular our desire to anesthetise ourselves as insulation from ugly realities.

By second half of the book the narrative has broken free from its shackles and has set about destroying itself, like a scorpion doused in alcohol, insane and stinging itself to death. Part two’s ninth chapter opens with an editor’s note informing the reader that the author is no longer in a fit state to lash the prose together, and there follows simply a transcript of Thompson’s recorded conversations. The narrative re-appears in time to close the book, emerging blinking into the cold light of day in fittingly hung-over, but unrepentant, style. Alongside the vivid imagery of the prose, Ralph Steadman’s hectic illustrations, which originally accompanied the articles, have become inseparable from the novel.

He followed what he called “my Vegas book” with Fear and Loathing on the Campaign Trail in 1972. Unlike most of the jaded hacks covering the race for the presidency, Thompson actually had experience of running for office. Two years earlier he had been a candidate for Sheriff of Pitkin County, Aspen in Colorado. He ran under his own “Freak Power” banner and proposed renaming Aspen “Fat City”, a ploy designed to discourage the developers who sought to turn the town into a money-spinning ski resort, and also, somewhat predictably, proposed the decriminalization of the possession and sale of recreational drugs. In order to subvert his image as a hippy he promptly shaved his head and during public debates referred to the crew-cut-sporting Republican candidate as “my long haired opponent”. He lost the election, but only by a handful of votes.

Even in his later years he continued to publish and stood out amongst the pantheon of global social commentators. On 12 September 2001 he memorably wrote ‘The towers are gone now, reduced to bloody rubble, along with all hopes for Peace in Our Time, in the United States or any other country.’

A common criticism of his work as a serious body of literature has been his own, and by extension his protagonists’, vast narcotics consumption and many critics have used this as an excuse to dismiss the uncomfortable truths that Thompson frequently voiced. However, unlike comparable authors, notably William Burroughs, Thompson never baffles the reader or slips too far into his drug induced stupor that he becomes incoherent. While drugs undoubtedly inform the text, it is his intellect which drives it.

The biggest criticism of Thompson, however, and it is a major one, is that by his success and his genius in writing about truth and what it means to be alive, he has inspired hundreds of fucked up morons with drug habits to think that they can write, and it is for that reason that papers like The Beaver have to endure contributions like this one.

On that note it only remains for me to drain this bottle of Wild Turkey and cram these pages into the mojo wire. Only his own words can come close to being big enough to serve as an epitaph. “Too weird to live, too rare to die.”

Originally published in the LSE’s The Beaver, 21 February 2006.