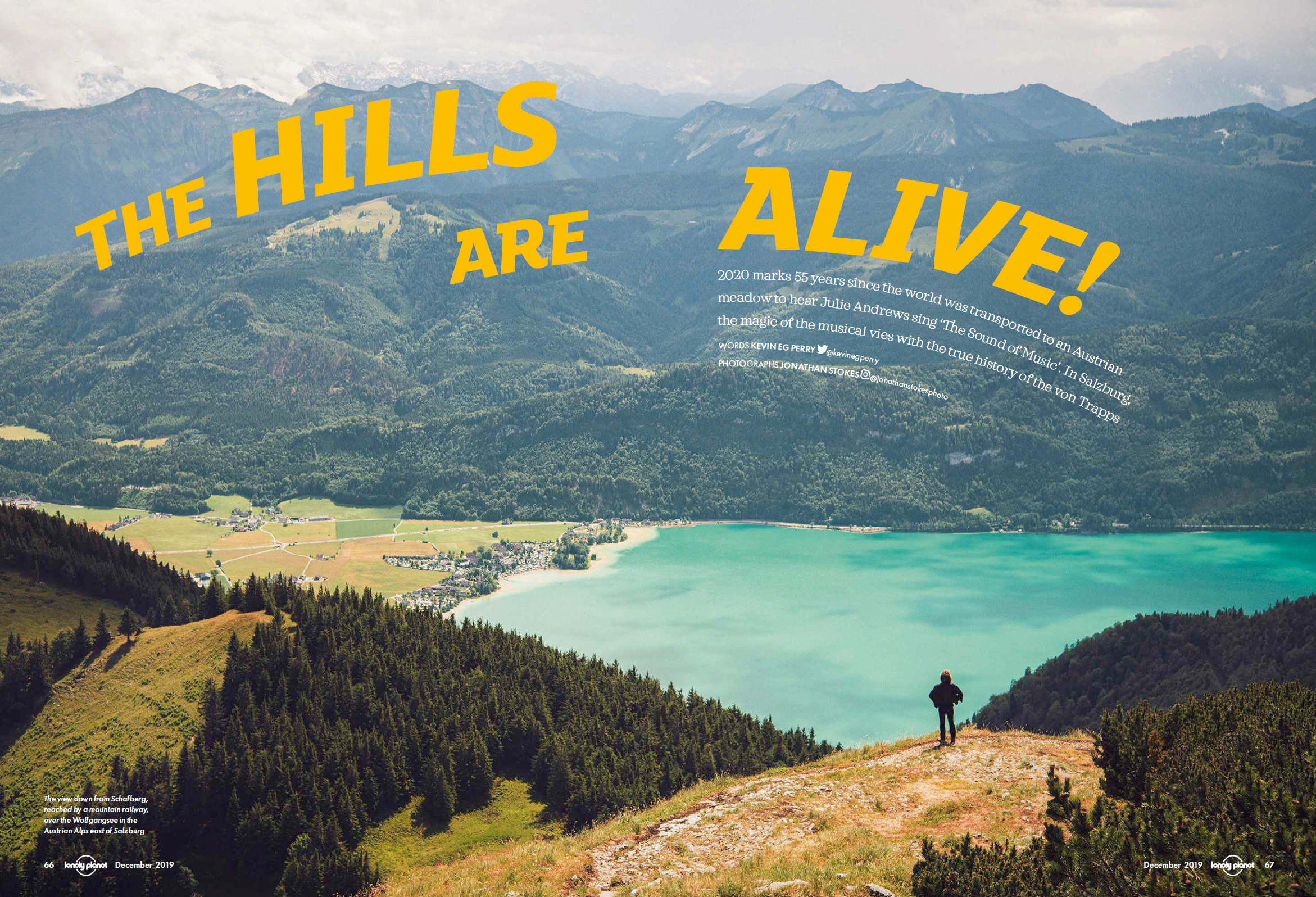 It’s only an hour until stage time in Salzburg but right now the star of the show is wedged sideways between the green folds of the scenery, looking a little lifeless. Tonight’s performance is Rodgers and Hammerstein’s The Sound of Music, performed here in the same city where the musical is set, and where the real Von Trapp family singers once lived. Maria, the singing nun-turned-fairy stepmother made famous by Julie Andrews, is sandwiched between the scenery because, when the time comes, the meadows will spring into motion at exactly the same moment she does. Here at the Marionette Theater, the hills really are alive.

The Maria waiting patiently amid the folded fields is just one of five puppet Marias who play their part in this show, each with a different hand-stitched costume that’s been painstakingly minaturised. Another Maria, wearing a dark blue dress with a white apron, is shyly dancing on her strings towards the edge of the stage where the theatre’s creative director Barbara Heuberger is perched. ‘Oh God!’ gasps Barbara, still moved by the grace of the puppet even after 20 years working here. ‘That smashes me. It’s just a dead piece of wood, but it can express something so powerful.’

The Marionette Theater only started performing The Sound of Music in 2007, at Barbara’s suggestion, but the theatre itself has been here for over a hundred years. It opened on 27 February 1913 with a performance of Mozart’s comic opera Bastien und Bastienne, and has been bewitching children and adults alike ever since. In 1964, while shooting the film version of The Sound of Music, director Robert Wise found himself so enamoured with the puppets that he became determined to include them in his movie. Theatre boss Hermann Aicher declined to get involved because he was about to tour America, but Wise was undeterred and hired his own puppeters to produce the famous ‘The Lonely Goatherd’ sequence. ‘I think that’s the biggest mistake in the history of this theatre,’ says Barbara with a laugh. ‘But we’re the reason why there are puppets in the film.’

For Barbara, it made perfect sense for the theatre to repay the compliment by staging The Sound of Music as their first musical after a century of operas. She understands, too, why 300,000 visitors come to Salzburg every year in search of its magic. ‘It’s got wonderful music, and it’s a story with heart,’ she says. ‘Maria is the great mother, the mother for everyone. She came to the rescue of this poor captain, and even if the real Maria wasn’t actually like that with the children it doesn’t really matter.’

The fact that the true story of the Von Trapps did not play out exactly as it does in the musical can come as a surprise to some of those hundreds of thousands of fans who make the pilgrimage here from around the world. The actual home of the Von Trapps, Villa Trapp, is not quite as grand as the version which appeared on screen but is nonetheless a beautiful stately home that dates from 1863. It is now a hotel, with a photograph of the seven singing Von Trapp children lined up above the sweeping central staircase, a beautifully restored parlour full of antique furniture and a breakfast room where guests eat together around a single large dining table, just as the family would have done. It’s run by the husband and wife team of Christopher Unterkofler and Marianne Dorfer, who have dedicated themselves to preserving the real story of the Von Trapp family.

‘It’s true that the captain went into town to ask for a house teacher,’ explains Christopher, an ebullient former journalist who hasn’t lost his knack for telling a good story. We’re stood in the sun on Villa Trapp’s well-kept lawn, part of a 3.5 hectare estate which remains one of the largest in Salzburg. ‘Maria was a teacher at Nonnberg Abbey, not a nun. She intended to become one but the Mother Superior was unhappy with her temper. Maria’s nickname was ‘The General’, so you can imagine what she was like. In reality, the characters were vice-versa. The captain was the charming Julie Andrews-type, and she was more stern, like Christopher Plummer. On the other hand, you have to be fair, she did take on a family with seven kids and she had to rule somehow.’

While Maria’s temperament may have been romanticised, much of the story really did happen as it appears in The Sound of Music. The children did form a successful singing troupe, Captain Von Trapp did use individual whistle calls to summon each of them, and they really did flee from the Nazis because Von Trapp refused to serve in their navy – although in reality they made their escape by train to Italy, rather than hiking over the mountains to Switzerland.

It’s also true that Maria and Captain Von Trapp married in the convent church at Nonnberg Abbey, where she had once dreamed of becoming a nun. Visible from around Salzburg with its distinctive red onion dome, the nunnery is still active to this day. I climb an ancient set of stone stairs to reach the church, which contains beautifully preserved Romanesque wall paintings that date from 1150. The most spectacular view, however, is from outside the priory gates. Looking south, jagged mountain-tops seem to fade gradually into the blue of the sky as if some long forgotten Romantic artist had sat down and painted an exquisite backdrop for the whole city.

Whatever the truth about the mortal Von Trapp family, it’s the timeless pull of Robert Wise’s film that has been drawing people to Salzburg ever since it was released in 1965. Wandering down from the Abbey through the narrow cobbled streets of the city it’s easy to spot familiar sights from the film: the vast Baroque cathedral, and the Rock Riding School hall where the climactic concert takes place. In the fruit and vegetable market in Universitätsplatz I stop to eat a juicy tomato, like the ones Julie Andrews juggles with. Wherever I go there seems to be music echoing from around every corner, whether it’s a choir in the cathedral or an a capella group rehearsing in a beer hall. The sound bounces off the cobbles, mingling with the gentle clip-clop of horses pulling carriages and the splashing of water in the fountains.

A little further out is Schloss Leopoldskron, the grand house whose lakeside location was used for the scene where Julie Andrews and the children fall noisily into the water. Today the park beside the lake is quiet and tranquil, even though it’s a bright and warm Saturday afternoon. A group of men sit around on the bank of the lake with a hookah, their fishing lines dangling in the water, hoping for carp. Swans glide serenely over the placid surface. The house itself looks chocolate-box perfect on the far shore, with Hohensalzburg Fortress hovering over its shoulder. Just as in the film, the castle is a constant landmark, always in view somewhere above and beyond the workaday city.

One of the most famous Salzburg locations in The Sound of Music is the Mirabell Gardens, where Julie Andrews and the children perform their choreographed song-and-dance routine of ‘Do-Re-Mi’. Tour guide and dedicated Sound of Music superfan Trudy Rollo has no qualms about launching into her own rendition as we climb the steps towards the rose hill, and I find myself joining in. It’s as if everyone else in the gardens has been secretly waiting for this moment. Soon others have gathered around us, hesitantly singing and then breaking into applause at this impromptu moment of joyful abandon and reverance for the music that has drawn so many of them here.

Trudy is not surprised that The Sound of Music is still winning new fans half a century after it was released, or that they’re drawn to Salzburg. ‘It’s a good family film,’ she explains. ‘There’s no rampant sex scenes or major violence. Good wins over evil. Every time I watch that opening scene on a big screen, with Julie doing her twirl on up on the mountain, I still think: ‘Wow!’ It’s just so beautiful.’

The exact same thought comes into my own head while I look out at the rolling green hills surrounding the Posch’n Hütte, a wooden mountain cabin high up in Salzkammergut, the Austrian lake district. Taking a hike over the nearest ridge I watch as clouds roll into the valley below. Although just a short drive from Salzburg, the cabin feels like it inhabits another time. Even the air tastes sweeter. This is splendid isolation, cut off from the modern world without phone signal or wifi.

In nearby St. Wolfgang there’s a steam-powered cog railway up the Schafberg mountain which had a brief cameo in The Sound of Music, taking Maria and the children to the meadow where she teaches them to sing with ‘Do-Re-Mi’. As the track curves up the hillside at an incredible gradient the little engine chugs along, pushing – not pulling – the carriages through thick forests which eventually break to allow spectacular views over Lake Wolfgang. Within minutes we’re up above the clouds, looking out at grazing cows seemingly unphased by the altitude.

‘It’s wonderful here,’ says Martin Bahr, a train driver on the SchafbergBahn who grew up dreaming of working on these steam engines. ‘We have the lake and the mountains. I can go swimming, I can go out on a boat. I think it’s one of the most beautiful places in the world.’

Martin knows about the train’s brief appearance in The Sound of Music, but he’s more concerned with the noise a steam train makes all by itself. ‘For many people,’ he says. ‘It’s music.’

At the summit of Schafberg, a short climb from the train station, is a hotel serving good coffee and apple strudel. Directly behind the building is a terrifyingly sheer drop, a fact mitigated only by its breathtaking views. As I look down at the rough-hewn peaks reflected in shimmering lakes and the church spires jutting up from little towns I can’t help but think of those famous aerial shots which open The Sound of Music. Rather than taking the train back down, it feels better to walk down through the soft green grass of the meadows, listening to the music of the passing trains, the clanking of cow bells and – with apologies to Rodgers and Hammerstein – to sing:

Had a blast talking to drag icons @bobthedragqueen, @eurekaohara and @itsshangela about what they've learned about small-town America while making their moving docuseries We're Here. In today's @the.independent
After they created the Oscars in 1929, the Academy moved on to their next job: opening a movie museum in LA. It's taken them 92 years, but @academymuseum is finally opening this week. I had a poke around for @the.independent and was delighted to find Dorothy's ruby slippers, The Dude's bathrobe, and most importantly of all: a special room purpose-built for picking up an Oscar and mugging for the camera.
Had a chat with the big man @jamesblake about losing friends and making tunes.
In 1969, hours after coming offstage at Woodstock, @thedavidcrosby went on national television and said the only way to clean up the environment would be to convince all the big oil & motor companies to go out of business. I talked to him about that, his gorgeous new album and not cutting your hair for today's @the.independent