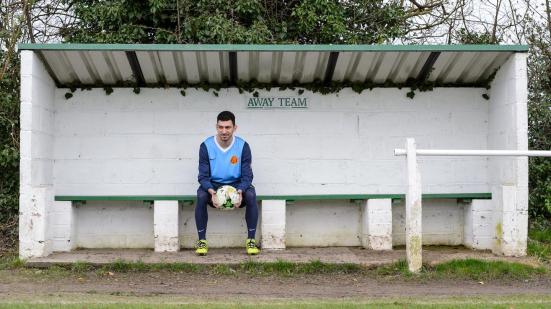 I’m a refugee, but I’m also a footballer. I play for Bilston Town at the moment – a team near where I live in Birmingham. I’m a midfielder and I can play on either wing or behind the striker. Some of my teammates call me ‘Coutinho’, because I have the same style as him – I can score goals but I focus mainly on creating chances, and I get a lot of assists.

It’s been my dream to play in England ever since I was a little boy – I think the Premier League is the strongest league in the world. I support Liverpool but I’d love to play professionally for any club here. I’d play for whoever gave me a chance.

I’m originally from Homs. My brother and I fled the war in Syria in 2012 – my parents wanted us to leave our family and get away from the violence and the fighting. At the time I was playing for Al-Karamah SC, one of the top clubs in the country and one of the oldest sports clubs in Asia. I first joined Al-Karamah when I was 7 years old, and ended up playing for their Under-17 team. Before I left Syria, I was even named best player in the Under-17 league. Life was good before the war started. It was hard for us to leave the country, but the war had destroyed everything we loved, everything that was familiar to us. It was dangerous to even just walk down the street.