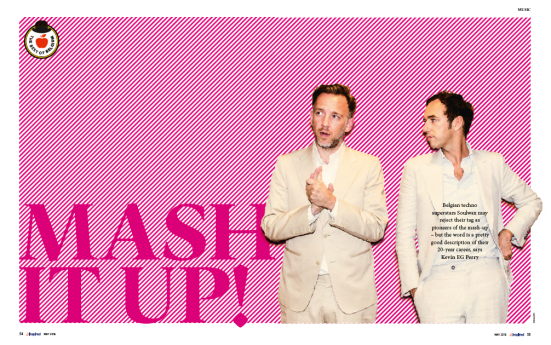 Soulwax, it’s fair to say, don’t like labels. “There’s this misconception about us that we invented the mash-up,” said Stephen Dewaele, when I got a brief audience backstage before a gig at London’s Brixton Academy. “It’s weird, because with everything we do, that becomes the anchor to hang it on. Even if it’s an hour of ballads the press will call it a mash-up. We’re like: ‘Have you not listened to it?’ It’s weird that people need that label.”

You can see the temptation. Soulwax, which is primarily made up of brothers Stephen and David Dewaele, are still best known for blasting Dolly Parton and 99 Luftballons at ravers with their 2002 mash-up album, As Heard on Radio Soulwax Pt.2. The incongruous mishmash of styles – called “bastard pop” by some – sold half a million copies, was named the best pop album of the year by the New York Times and became a near-eternal student party staple.

But Soulwax’s career has been as varied as their mashups, taking in everything from Beethoven to Belgian film scores. Indeed, when they released their debut album 20 years ago this month, it was a piece of mid-1990s post-grunge. Leave The Story Untold received only limited notice, and there was little expectation that its creators would become arguably the most influential Belgian musicians since Jacques Brel stubbed out his final cigarette.

By the time another grunge album came and went in 1998, the Dewaele brothers had started DJ-ing themselves, having realised that the techno clubs of Belgium weren’t playing any of the music they’d grown up listening to. When they first DJ-ed together by chance in 1997, they played Michael Jackson’s Billie Jean and New Order’s Blue Monday in quick succession. It shouldn’t have been much of a surprise that the Dewaele brothers had a certain something behind the decks. Their father Jackie Dewaele, better known as DJ Zaki, was one of Belgian radio’s biggest stars in the 1960s. But they had no intention of following him until, under the guise of 2manydjs, they started putting together a show for alternative music station Studio Brussel.

They made 12 unofficial compilations for Studio Brussel, the first of which was turned into the official album that went global fast (it was the only one they could clear all the rights for). Mash-ups weren’t new, but the genre had been largely dormant – and no one had ever quite thought that American country singer Dolly Parton and Norwegian electronic duo Röyksopp would make such perfect musical bedfellows.

“We don’t have a problem being called ‘mashup pioneers’ or whatever,” says Stephen, “but it’s something we only did for eight or nine months of our lives, and for the rest we’ve been remixing, producing, playing Soulwax, DJ-ing as 2manydjs, making Radio Soulwax. A lot of it has nothing to do with mash-ups, but that word is always in there!”

After As Heard on Radio Soulwax Pt.2, the brothers performed a typical volte-face, creating electronic rock album Any Minute Now in 2004, and then remixing their own work for the dancefloor on 2005’s Nite Versions.

With their own hits such as E Talking gaining traction, they started doing official and unofficial remixes for other bands, from Gorillaz to Daft Punk and their friends LCD Soundsystem.

Their stock in trade was a distinctive, populist take on club culture, and their persona has always been at once idiosyncratic and carelessly matter-of-fact. In 2007, they released a compilation of their remixes that at the time had the longest title ever: Most of the Remixes we’ve made for other people over the years except for the one for Einstürzende Neubauten because we lost it and a few we didn’t think sounded good enough or just didn’t fit in length-wise, but including some that are hard to find because either people forgot about them or simply because they haven’t been released yet, a few we really love, one we think is just ok, some we did for free, some we did for money, some for ourselves without permission and some for friends as swaps but never on time and always at our studio in Ghent.

That studio was rebuilt and retooled over three years at the beginning of the 2010s, and is now home to an Aladdin’s cave of decades-old analogue gear alongside state-of-the-art digital equipment. Indeed, they’ve become something of connoisseurs of audio installations. In July 2013, they teamed up with LCD Soundsystem’s James Murphy to build every audiophile’s dream nightclub: Despacio, a custom-built 50,000-watt system that only plays vinyl. They’ve spent the intervening years taking the system on tour.

Meanwhile, they’ve still found time to get back to the studio themselves to make genre-bending music. Their most recent project is the soundtrack for the Belgian film Belgica, which follows two brothers who run a nightclub. Each of the 16 bands who appear on the soundtrack are fictional, with the music – which ranges from Kraut-techno to psychobilly and hardcore – written and recorded by the brothers themselves.

The Dewaele brothers are almost impossible to pigeonhole. At times it seems like they’re basically the world masters at creating mixtapes of the music they love. As Stephen says: “We’ve been called many things: ‘electropioneers’, ‘a punk funk band’, ‘an electronic rock band’, many, many things. It’s nice to survive those names. We just keep doing music we like.” After two decades, that simple approach seems to have worked out quite well.

Published by Brussels Airlines’ b inspired, May 2016.