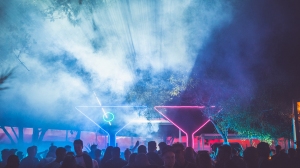 If you work for the tourist board of a small Mediterranean island, British clubbers are presumably seen as something of a mixed blessing. Sure, they’re going to fill your hotels, eat at your restaurants and buy enough sambuca to double your GDP, but they’re also going to get lairy, keep their soundsystems going until 4am and end up performing drunken sex acts on your picturesque cobbled streets.

It’s a chance Malta were willing to take this Easter when they invited Annie Mac to put on the inaugural Lost & Found festival over the long weekend. The island is no stranger to hard-partying Brits. Oliver Reed died of a heart attack here in 1999 at the age of 61 after drinking eight beers, three bottles of rum, a few rounds of whiskeys and a couple of cognacs – all the while beating five Royal Navy sailors at arm-wrestling. It’s a miracle they’ve got any booze left at all.

In 2009, Jodie Turner-Smith, having never acted professionally, quit her job in corporate banking to move to Hollywood and chase her dream. Had a lot of fun talking to her about being scouted by Pharrell, her remarkable breakout role in 'Queen & Slim' and the joys of watching Michael B. Jordan take his kit off.
Talked to Paris Jackson about how often she got to ride the rollercoasters at Neverland, among other things. For @eveningstandardmagazine 📸 @djeneba.aduayom 👗 @rebeccarams
Fela. All I want to listen to these days. Was an honour to talk to @femiakuti and @madekuti about keeping the family legacy alive for @nmemagazine.
My lockdown beard and I will be hosting a panel on cannabis and culture at @prohibitionpartners this week. DM 4 guestlist.