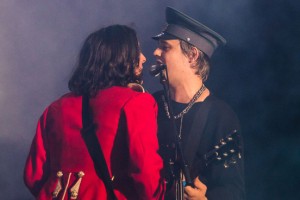 I’ve spoken to some of NME’s resident Libertines scholars and we think that the last time Pete Doherty, Carl Barât, Gary Powell and John Hassall all took to a stage together anywhere in mainland Europe was most likely 20 February 2003, at Loppen in Copenhagen. As with much Libertines lore the truth is clouded with uncertainty and a fog of drugs, but in any case it was certainly over a decade ago.

The most surprising thing about their return to continental gigging in Lisbon was that they turned up not just on time but even fractionally early – starting into ‘The Delaney’ promptly before quarter past midnight, after the strains of Vera Lynn’s ‘We’ll Meet Again’ had died away from over the tannoy. While The Libertines turned up, it’s worth noting that not a lot of Portuguese did – the crowd was smaller than it had been for Arctic Monkeys and The Black Keys, and very sparse indeed compared to the more mainstream likes of Bastille and Imagine Dragons. Of the hardcore who did turn up, most seemed to be British exiles enjoying a weekend in the sun with their heroes. What the Portuguese missed was a predictably ramshackle set, but it shone in brief flashes like pearls in muck. Here’s a motley handful: