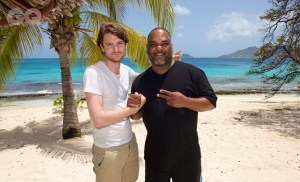 It was 1967 when Palm Island first got its name. Until then this speck of land in the southern tail of the Caribbean had been known by the less salubrious moniker ‘Prune Island’. In truth, it was little more than a swamp when John Caldwell first set foot on it. If you mention Caldwell’s name to any old sea salt they’ll tell you he was the mad American who set off to sail from Panama to Australia at the end of WWII in search of Mary, his wartime bride. He had little idea how to sail and not much on board beyond two cats and a book on navigation. Before long he was wrecked in a hurricane somewhere off Fiji and nursed back to health by the islanders. After he finally made it to Australia and was reunited with Mary he wrote a book, ‘Desperate Voyage’ which recounted various tall tales from his time at sea, like the time he was forced to survive by frying shoe leather in engine oil.

The experience did little to put him off sailing. In the Sixties he, Mary and their two sons chartered a boat around the Caribbean and he developed a habit of carrying sprouting coconuts which he’d plant when they made land. It was in this way that Prune Island became Palm Island, as the new trees reclaimed dry land from the marshes. In 1966 he leased the island from the government of St Vincent & The Grenadines for 99 years, at a rate of $1 per annum, with the aim of opening a resort there. He changed the name of the island, just as the islanders had changed his. By this point, everyone was calling him Johnny Coconut.

My first sighting of the island Johnny Coconut built was from the window of our little 19-seater DHC-6 Twin Otter before it turned to land on the nearby Union Island. We’d had to wave goodbye to the luxury of Virgin’s Upper Class in Barbados. Needless to say there is no landing strip on Palm Island so we made the final leg of our journey by boat. The island is just 135-acres of green, edged with a golden border and stretched almost flat in the turquoise sea. It’s the sort of desert island where, if you were to become stranded, you’d take your time about organising a rescue. It’s no surprise to learn that just a well-skimmed stone away is Petit Tabac, where Johnny Depp uttered the deathless line: “But why is the rum gone?”

I wasn’t there to worry about pirates. GQ had asked me to go there to meet De La Soul’s DJ Maseo, who had been booked to play on the beach. It was an offer I couldn’t refuse.

The morning after we landed I went to visit Maseo at his villa. I’d been up late the night before drinking some sort of peanut-infused local rum. Maseo immediately saw that I was a man in need of help and quickly whipped up a batch of scrambled eggs. “This is the best hangover cure,” he assured me, with that distinctive laugh that Damon Albarn loved so much he sampled it for the opening of Gorillaz‘s ‘Feel Good Inc.’ With no false modesty he added: “I make the best damn scrambled eggs in the motherfucking world. I-Hop got nothing on me. Denny’s got nothing on me.” He was right too. The man makes damn fine scrambled eggs.

Later on we settled down to talk about how he’d ended up on Palm Island. “It’s been somewhat of a Bucket List thing to come to the Caribbean,” he explained. Gesturing behind him at the beach, he added: “It’s a piece of paradise. It’s very tranquil. If you have a technology habit, you might not want to be here. This is a total switch-off, where you can come to revive.”

In keeping with the laidback vibe it was to be a silent disco – the first of its kind in the Caribbean and the first that Maseo had played. “The ambience of it will be really interesting,” he said. “It’s more relaxing. It’ll be cool to see people actually partying in headphones. There’s no speakers and there’s no club. It’s outdoors, but the heat won’t bother me and the wind won’t bother me in terms of what I want to achieve. It’ll be mellow.”

There was still a day to fill before the set so, leaving Maseo to his iPod and his eggs, I set off on the resort’s Catamaran Yannis to explore the nearby islands and inlets. Dotted around Palm Island are all sorts of spots where we could snorkel, chasing little fishes between the rocks and swimming side by side with sea turtles. There’s nothing that’ll remind you that you’re in someone else’s habitat faster than following a turtle while a stingray passes serenely by in the opposite direction. It’s hard to conceive that somewhere on the same planet the District Line still trundles on.

When the sun went down the party started back on Palm Island. We got out of our wet clothes and into a dry martini, or at least an excellent mojito. Maseo’s set opened with De La Soul’s greatest hits before sliding into a series of hip-hop and soul classics, and it was mellow just like he promised. You soon forgot the headphones because there are few dancefloors on the planet where waves lap gently at the edges and you can look straight up into a star-filled sky. There’s even a ‘cool breeze on the rocks’, as De La Soul once said. In that moment we were one island nation under a groove, and the great thing about being stranded in the place Johnny Coconut dreamed up is that the rum is never gone.