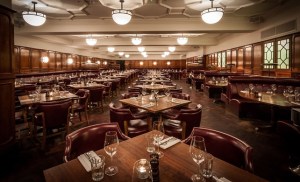 People say that port gives you monstrous hangovers. People would be wise not to say that to Tim Stanley-Clarke. “Bullshit!” is the port expert’s robust assessment. “And I speak from years of first-hand research.”

Stanley-Clarke, who works for the Symington Family, owners of various famous port producers including Dow’s, Graham’s and Warre’s, is on a mission to see Port restored from its current position languishing as a night cap – the real reason he thinks it gets the blame for hangovers is that it tends to arrive at the tail end of a night of drinking – to a wine to be enjoyed over a long and sumptuous dinner.

Fortunately, we met at Hawksmoor where they do that sort of thing rather well. While the Graham’s Fine White Port, served with scallops, is too sweet for our taste, the Graham’s 20 year Tawny Port makes Stanley-Clarke’s case. It’s rich with a long, smooth finish and not entirely unreasonable at £35 a bottle. It holds its own paired with Hawksmoor’s Tamworth Belly Ribs, which is so soft and tender you lament for every time you have to eat pork cooked any other way.

The real star of the night though is Graham’s Quinta dos Malvedos 2001 Vintage Port, which comes exclusively from the company’s famed flagship vineyard and is blessed with a rich blackberry taste, a long finish and a £24 pricetag. And the best part? No hangover.