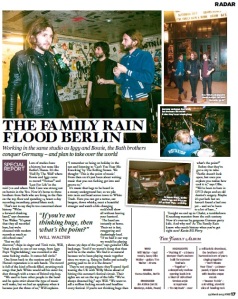 Lots of studios have a history, but none quite like Hansa. It’s the ‘Hall By The Berlin Wall’ where Bowie and Iggy came to record ‘“Heroes”’ and ‘Lust For Life’ in the middle Seventies and where Nick Cave was strung out on heroin in the Eighties. Now it’s home to three brothers from Bath who are living in the flats on the top floor and spending fourteen hours a day recording incendiary, primal blues rock.

That’s not to say they’re too concerned about the weight of history. “We’re not looking towards the past,” says drummer Tim. “We’re a forward-thinking band. It’s great that all those guys recorded here, but we’re obsessed with modern records as much as we are old-school ones.”

“But we did find out,” chips in singer Will, “that a break we used in one of our songs from Iggy Pop’s ‘Nightclubbing’ was recorded in the same fucking studio. It comes full-circle. That’s fucking cool.”

One listen back to the album sessions and it’s clear Hansa’s reputation is in safe hands. The record is full of the sort of hook-filled, strutting rock songs that Jack White would sell his sister for, shot through with a trace of Bristol trip-hop.

“We used to have other people in the band and be quite strict about the type of music we’d make, but we had an epiphany when it became just the three of us,” Will explains. “I remember us being on holiday in the sun and listening to ‘Can’t You Hear Me Knocking’ by The Rolling Stones. We thought: ‘This is the point of music. From then on it’s just been about writing music that you can fucking get into and groove to.”

It’s the sort of music that just begs to be heard in a sweaty underground bar, so we pile into taxis and head across town to White Trash. It’s the sort of place where you can get a tattoo, eat a heart-punishing burger, down a shot of whisky, smoke a cigarette, meet a beautiful stranger and watch a life-changing rock’n’roll show all without leaving your barstool.

The band are instantly at home. Their set is fast, swaggering and deafeningly loud. “If we had it our way we would be playing shows 365 days of the year,” says guitarist Ollie backstage. “And if we weren’t doing that then we’d be in the studio. We find it so natural because we’ve been playing music together since we were 14. Being in Berlin and actually getting paid to do it is the dream.”

They’re not stopping here: they’ll spend April touring the UK with Willy Moon ahead of hitting this summer’s festival circuit. Their sights are trained on the top of the bills: “We’ve always dreamed big,” says Will. “We want to sell a million fucking records and headline every festival around the world. If you’re not thinking huge then what’s the fucking point?”

Before that they’ve got a city to take. “Berlin doesn’t look open, but once you explore you realise how cool it is,” says Ollie. “We’ve been to bars in DVD shops and an old dentist surgery. Maybe it’s pot luck but we haven’t found a bad one yet – and we’ve been to a lot of bars…”

Tonight we end up in Chalet, a tumble-down Kreuzberg mansion which dates from the 19th Century and must have been a stately home in its time. Now it’s overrun by hordes of gorgeous German party kids. And why not? As The Family Rain know: who needs history when you’ve got right now?