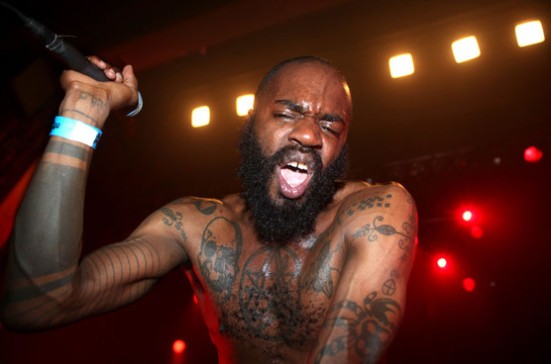 Any city whose staple food is chips, gravy and cheese curd is alright by me. Montreal’s proud, surprisingly not overweight, citizens call it ‘poutine’ and even if you don’t rock up at notorious 24hr joint La Banquise until four in the morning they’ll still be queuing around the ice cold block for it. I was in town last week for the annual M For Montreal festival, Canada’s new band festival and worthy rival of the likes of SXSW and The Great Escape. In a handful of crammed city centre venues the festival cheerfully slathered some of the year’s best international acts over a generous helping of Canada’s finest homegrown bands. I put on my warmest, furriest hat and headed out into the frozen night to see what I could find. These are the bands worth writing home about:

Death Grips
M For Montreal pulled off something of a festival coup by bagging Death Grips, and the Californians were easily the pick of the international bands. Yeah, so it’s a bit of a shame that touring without production guru Andy ‘Flatlander’ means they’re playing to a pre-recorded backing track, but even that doesn’t take too much away from Zach Hill’s monstrous drumming, which seems him breaking drum sticks and hammering the skins with his fists, or from the visceral power of MC Ride in full flow. A ferocious live proposition.

Blue Hawaii
Initially sold to us on the Grimes connection (they’re signed to Arbutus Records and have opened for Montreal’s current indie queen on various occasions) it took about 4 seconds of their set in Casa Del Popolo on Wednesday night for it to become clear that they’re in no need of riding anybody’s coat-tails. Singer Raph is blessed with an immediately captivating voice while her boyfriend Agor works all kinds of magic on synths and drums. The first band of the week to get everyone dancing, I next saw them in an underground illegal warehouse manfully battling to keep playing on while the party was shut down around them. Well played.

Suuns
Dark, experimental rockers Suuns were much feted at the beginning of 2011 when they released debut album ‘Zeroes QC’, but on the evidence of their set following Blue Hawaii at Casa Del Popolo their second record ‘Images Du Futur’, due next March, will be one of the highlights of 2013. You can hear lead single ‘Edie’s Dream’ now – but here’s a tip for when you’re raving about them later: it’s pronounced ‘Soons’, not ‘Suns’.

No Joy
There was a whole lot of shoegazing going on at M For Montreal, so for any band to stand out they had to be doing something special. Thank the Lord then for No Joy, who actually have the songs to back up the de rigueur hazy guitar sounds. Their ‘Negaverse’ EP, released this year, has been blowing Montreal’s collective minds, but personally I’m just a sucker for anyone who dedicates a great rock tune to Philip Larkin.

Duchess Says
Regardless of the sprawling lineup, the one band all the organizers were raving about in private were Duchess Says. Something of a Montreal institution having formed a little under a decade ago, they brought their driving Stooges-with-synths to the skull-covered environs of the Katacombes. I didn’t see a better live performer all week than Annie-Claude Deschênes, who wails like Karen O and spent most of the show walking upright over the crowd, held aloft by a sea of hands. The devout down the front would swear she could do the same on water.

Mac DeMarco
There could be only one victor of this year’s festival, however, and that was Mac DeMarco. Montreal will be dominating end-of-year album lists across the world and across genres thanks to year-defining records by such disparate musicians as Grimes and Leonard Cohen, but Mac’s the next big thing. His record ‘2’ is full of deceptively simple riffs and laidback jamming with snatches of everyone from The Modern Lovers to Pavement. He was welcomed back to Sala Rossa as a returning hero, and had already won the audience over before the final charming moment of crowd-surfing with his girlfriend in his arms while ‘Together’ played out. If that wasn’t enough, the next night he turned up at a warehouse party playing drums and then bass with the brilliant Walter TV (who you can hear here). There’s nothing else to say but light up a Viceroy and dance.