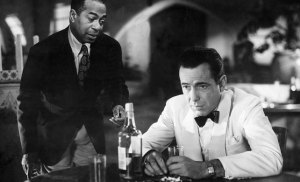 It’s easy to be cynical about Rick’s Café in Casablanca, so I was. The 1942 film which took the Moroccan seaport’s name is back in cinemas this week ahead of its 70th anniversary. It was of course shot almost entirely on the Warner Brothers’ backlot, but nevertheless in 2004 an enterprising former American diplomat opened something that its own literature describes as “more than a restaurant and bar… a tourism theme project.” That earnest line can’t help but conjure the sort of place where corpulent tourists fritter away their time and their fat rolls of dollar bills to the tune of “As Time Goes By” repeated ad nauseum. One shudders to think what Bogie would have made of this ersatz imitation of his famous gin-joint.

We had arrived in Casablanca by train early in a grey January afternoon. After the vibrant chaos of Marrakech, the stoned beauty of the Rif Mountains and the claustrophobic medina of Fes, Morocco’s largest city seemed like a town with all the colour drained out of it. It is not a place designed for tourists. All it has to offer beyond the undeniably spectacular King Hassan II Mosque, built out over the sea, is the world’s largest artificial port, stacked high with containers and a workaday ville nouvelle where the roads never remain unclogged for long.

As night fell we realised we’d have to pick one of the many roadside cafés for dinner, but the truth was that since arriving in Morocco we’d eaten our fill of lamb tagine and drunk an ocean’s worth of mint tea. We could try and resist, but there was always going to be another option. Hell, where else are you going to go for dinner in Casablanca? Everybody comes to Rick’s.

I hadn’t been inside for long when I caught sight of Humphrey Bogart and Ingrid Bergman’s flickering likenesses in black and white. If I had been cynical about the “tourism theme project”, I was never cynical about the film. The screenwriting guru Robert McKee rates it so highly that he ends every one of his weekend script master-classes with a six-hour annotated reading of Casablanca, during which he walks his students through the film scene-by-scene and at times even beat-by-beat. What makes this veneration all the more remarkable is that Casablanca was not the work of a virtuoso writer but the product of months of internal disputes between director Michael Curtiz and a team of writers including brothers Julius and Philip Epstein as well as Howard Koch. The abridged version of their wrangling is roughly that Koch wanted to make a political call-to-arms while Curtiz wanted to make a romance. Somehow, they ended up making both and tailored it without seams.

There’s a lot going on in Casablanca. Umberto Eco argued that it succeeds because it is crammed so full of clichés that somehow, as the clichés begin to talk amongst themselves, the film reaches into the depths of philosophy. “Casablanca  is not just one film,” he wrote, “It is many films, an anthology. Made haphazardly, it probably made itself, if not actually against the will of its authors and actors, then at least beyond their control.” Robert McKee, for his part, argues that the film is about “the difference between love and romance. It’s about the possibility that we can be ourselves and change at the same time.” For me, Casablanca is most of all about the challenge of living without illusions without becoming disillusioned. When Rick asks the resistance leader Victor Laszlo: “Don’t you sometimes wonder if it’s worth all this?” it’s a political challenge but also an existential one.

That’s why I can only blame the filmmakers for the fact that after we took our table overlooking the bar and the piano player, we had a hard time not enjoying ourselves. Lennie Bluett, whose mother was Humphrey Bogart’s cook, and who once upon a time auditioned for the part of Sam, played graceful jazz and mercifully limited “As Times Go By” to a solitary outing. The food and service were faultless, with a menu that makes good use of the local fishing port and features an outstanding roast duck dish served with fruit chutney. Three courses and drinks over an unhurried three hours cost 800 dirhams (£60). After dinner, at the bar, the smoky ambience was a reminder that Rick’s really wouldn’t quite work in any country that enforces a smoking ban. It shouldn’t work here either, but somehow, in Casablanca, it does. It works just as long as, as Rick’s friend Captain Renault would put it, under that cynical shell you’re at heart a sentimentalist.