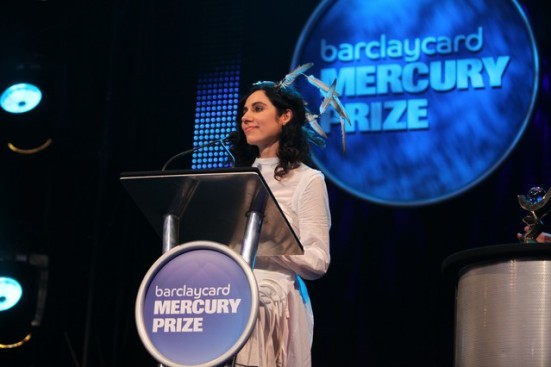 I arrived at the Grosvenor House Hotel just in time to be reminded that I should refer to tonight’s Mercury Prize as the ‘Barclaycard Mercury Prize’, which of course I’m only too happy to do. I would have thought that Barclays might like to lay low for a while, what with it having emerged earlier in the day that they’re being sued by the US government for “routinely breaching their own mortgage-lending rules” and bullying supposedly independent appraisers so that they “feared for their livelihoods, and therefore cherry picked data” to support home loans which should never have been granted. But hey, if the Mercury Prize wants to be associated with the “liar loans” lawsuits then so be it: the Barclaycard Mercury Prize it is.

Speaking of reckless gambling, I rang my man Rupert Adams at the bookies, William Hill, shortly before proceedings began and he assured me that PJ Harvey remained the firm favourite at 6/4 on, but that King Creosote and Jon Hopkins had enjoyed a late flurry of bets. “Over the weekend we have seen significant gambles on King Creosote and Jon Hopkins, who our punters think could be the dark horse this year,” he said, which I took under advisement given that last year Mr Adams told The Guardian that Paul Weller had been at the centre of the “biggest turnaround in music betting for 40 years” just hours before he lost to long-term favourites The xx.

I collected my press credentials and entered the Art Deco opulence of Grosvenor House’s Great Room, complete with extravagantly ostentatious chandeliers. The room was originally built as an ice rink, so it had been designed with a broad balcony running around the outside of the open central space. This is as far as I got, as heavily-built men in ill-fitting suits stepped in to bar my way downstairs. Below me, on what used to be ice, eighty tables full of music industry suits and Barclays bankers chilled out in places which reportedly cost £2,000 a head. Meanwhile I was swiftly escorted towards the press enclosure, where the only bar sold bottles of beer for £8 and a bottle of wine for over £30. Not being a banker, I reached for the bottle of whiskey I’d secreted about my person but was soon distracted by the distant sound of a man mumbling mournfully into a wind tunnel. Further investigation revealed that it was Jools Holland saying something about a music prize. The time had come.

Tinie Tempah and Anna Calvi were first up, but I was distracted by bumping into Metronomy. Bassist Gbenga Adelekan, looking as dapper as ever, said the band were feeling relaxed but slightly weirded out by the fact that they’d been asked to leave the venue earlier so that they could re-enter on the red carpet for the benefit of the cameras. Never trust anything you see on TV. I drew an ill-advised parallel with the practice of war-reporters setting up cameras inside buildings so that they could be filmed kicking down doors from the inside, which Gbenga kindly and patiently ignored.

I wished Joseph Mount luck, and mentioned that like him I had spent my own adolescence on the English Riviera. “Oh, I’m sorry,” he smiled. I thanked him for making Torbay seem like a tropical paradise, both in song and in music videos. He said that he occasionally gets complaints from people who think he’s misrepresenting it, which seems to be missing the point somewhat. If there’s a lesson here, it’s that musicians should never read the comments under their own YouTube videos; a world of mad opinions and bad spelling awaits.

On stage, Gwilym Simcock played ‘These Are The Good Days’, starting off by using the piano keys in the time-honoured manner but then progressing to reaching inside and playing the strings, which was a pretty neat trick. PJ Harvey was next up, and played ‘The Words That Maketh Murder’ dressed in a flowing white robe and matching headdress. Aside from the outfit, the performance was pretty low-key but this only served to underscore the strength of the source material. King Creosote and Jon Hopkins gave a similarly understated but beguiling performance, and after those two performances Metronomy’s chest lights alone seemed frighteningly futuristic, never mind the gorgeous pop of ‘The Bay’.

In an interval break I got chatting to a man from Barclays. “I don’t know much about music,” he said, which I’m not sure would have disqualified him from being on the judging panel. “I liked that King Creosote though, that was nice, and Metronomy were charming.” He’s looking forward to dinner, and to Elbow, in that order, which probably tells you most of what you need to know about the sort of night this is. He’s surprised when I tell him that the journalists don’t get served dinner, and seems a little confused as to why we’d have bothered coming.

Katy B’s performance was full of confidence and swagger, James Blake’s wasn’t. Adele had a bad voice, a doctor’s rather than a critical opinion, so we got a video. Everything Everything were followed by Elbow as the night’s music lurched to a close.

The whiskey was gone. PJ Harvey was declared the winner, and the consensus seemed to be that it was a safe choice only because she has made a truly great album. A swiftly erected dance floor lay depressingly empty. It was time to go home. It was hard not to feel like I’d spent a night at a carefully choreographed advertising function, which of course I had. This isn’t necessarily a negative, the likes of Ghostpoet and King Creosote and Jon Hopkins will have benefitted hugely and deservingly from their time in the spotlight. However, something about making exciting and talented artists perform for suited and seated bankers and label bosses makes the experience of the awards show vaguely uncomfortable. This is supposed to be a celebration of great art, but the art is elsewhere. The muse has been left weeping gently at home, and as I walk home I’m reminded of Nick Cave’s letter to MTV when he withdrew from their award show in 1996 and bridled against the very concept of making musicians compete for a prize: “My muse is not a horse and I am in no horse race and if indeed she was, still I would not harness her to this tumbrel – this bloody cart of severed heads and glittering prizes. My muse may spook! May bolt! May abandon me completely!”